Munly J. Munly 32nd has been a fixture in the Denver underground for over 30 years, his various endeavors presenting a mix of punk, blues, country, southern gothic, all with a decidedly doom-laden flavor. Among his projects is Munly & The Lupercalians, in which Munly and his band mates explore the darkly magical apocalyptic land of Lupercalia, with Kinnery of Lupercalia; Undelivered Legion announced as the group’s latest effort; originally released this past May as a limited edition item for the band’s fan club, the record is now available in a new vinyl edition. Taking inspiration from the literary works of A.A. Milne, Munly’s characters take more malevolent and unsavory turns, with the artist explaining, “I do love a few of my characters, however, I would not tolerate the majority of these abhorrence’s if they were real. And that is the crux. Many of these beings are not fiction in this world, for a portion of the human race they have been a dominating presence.”

Presented as an Oxblood-colored vinyl with gold-foil stamped jacket, the album can be purchased via Munly’s own SCACUNINCORPORATED imprint, both as a standalone LP and packaged with Confessions to Scare…, Munly’s book about the Kinnery of Lupercalia; digital editions of the album can be found on Bandcamp. Kinnery of Lupercalia; Undelivered Legion acts as the first entry in a trilogy that encompasses Munly’s primary outlets, with the second part to be performed by his Cessna’s Auto Club, while DBUK will cover the third album. Furthermore, Munly & The Lupercalians will be embarking on a world tour in support of the album throughout the month of October; the tour will take the band to Madrid, Budapest, Zagreb, Warsaw, Prague, Berlin, Paris, Barcelona, Zürich, and more. A full listing of tour dates and ticket links can be found on the SCACUNINCORPORATED website. 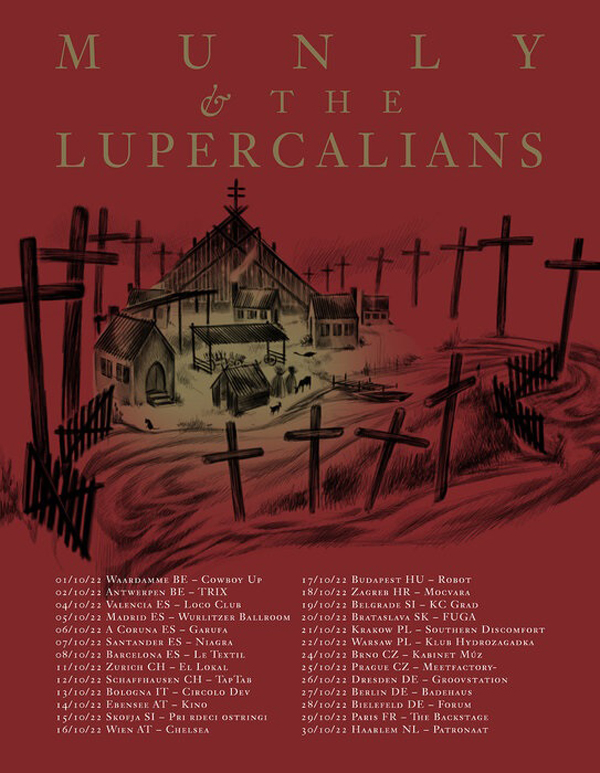