Following the announcement of its commercial release on DVD and Blu-Ray, the highly acclaimed and much anticipated Industrial Accident: The Story of WaxTrax! Records documentary will see another run of special screenings in six cities this spring. The screenings will include panel discussions and Q&A sessions, as well as a special performance by industrial/metal giants and WaxTrax! alumni MINISTRY; fans can rejoice as the band will be performing a special “WaxTrax! era set” encompassing material from MINISTRY’s ’80s and early ’90s output. Also performing live will be electro/goth act Cold Cave, with the events presented by Vans and in association with the annual Record Store Day; as such, the screenings will take place from April 13-23 in Chicago, Brooklyn, Toronto, Austin, San Francisco, and Los Angeles.

Industrial Accident: The Story of WaxTrax! Records, along with its corresponding soundtrack album, will be released on April 16, 2019, with pre-orders now available via the WaxTrax! website. The documentary will be released in DVD and Blu-Ray format, along with a deluxe edition with bonus material. The soundtrack will be available in CD and multiple vinyl variants, with both movie and soundtrack also presented in a “cash grab” box set limited to 1,000.

In addition, MINISTRY has announced dates for a summer tour in Europe and the U.K.; beginning in Nickelsdorf, Austria on June 16, the tour continues until July 19 in Gävle, Sweden at the Gefle Metal Festival. A full listing of tour dates can be found on the MINISTRY website. 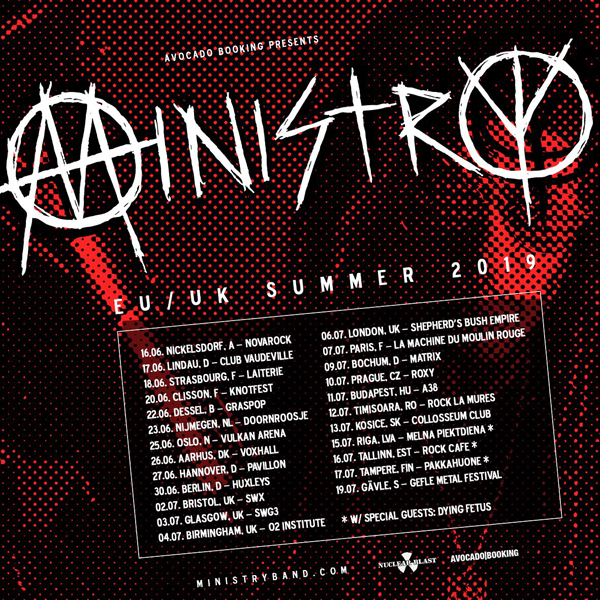