MINISTRY to perform first ever livestream as final show of 20220

2022 has been a rather busy year for MINISTRY as the band, after two postponements and changes to the line of supporting bands, finally embarked on the Industrial Strength Tour, as well as appearing at festivals like Hellfest and Louder Than Life, and sharing the stage with fellow industrial music legends Nitzer Ebb and Nine Inch Nails in Cleveland. To close the year out, Al Jourgensen and company have one more surprise in store with MINISTRY’s first ever livestream, featuring a set of classic hits spanning the band’s 40 years, including selections from the 2021 Moral Hygiene record. Scheduled to take place on November 20, the livestream will be available in more than 30 countries as a concession to the band’s European fans following the cancellation of a planned fall tour due to unforeseen circumstances; streaming on the HITKOR platform. tickets to both stream live and watch on demand are available now for $17.99, with an All Access option – including behind-the-scenes content and an exclusive interview with MINISTRY – available for $19.99. The performance will be conducted by the current lineup of Jourgensen, guitarists Cesar Soto and Monte Pittman, bassist Paul D’Amour, keyboardist John Bechdel, and drummer Roy Mayorga, with the band hinting at possible special guests to also appear. 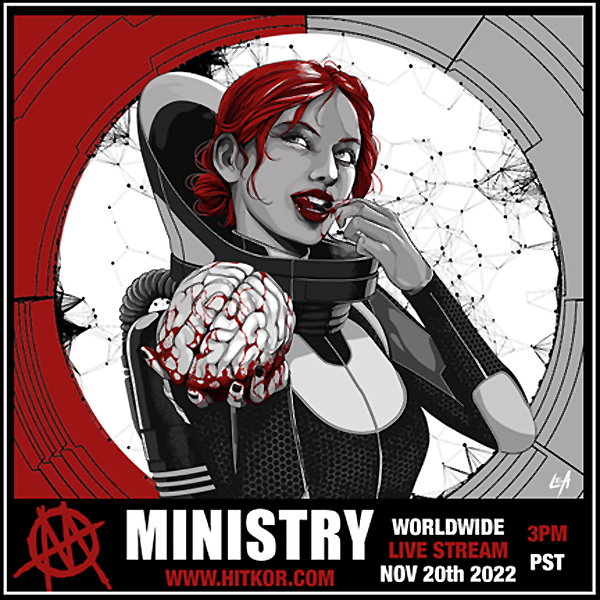