Lord of the Lost has had a rather momentous year having released The Heartbeat of the Devil EP this past May, followed by a stint as the supporting act for longstanding heavy metal band Iron Maiden on the band’s Legacy of the Beast tour. Now, the German dark rockers have revealed their latest single from the EP, a cover of Iron Maiden‘s “Children of the Damned,” along with a music video that contains footage on-and-off the stage from the tour; paying homage and giving thanks to the metal legends, the cover infuses the song with Lord of the Lost’s signature brand of symphonic piano- and guitar-laden drama, while the video captures the band performing in some of the largest venues and metropolises throughout Europe.

“Children of the Damned” was featured alongside covers of Lady Gaga’s “Judas” and “Wig in a Box” from Hedwig and the Angry Inch, as well as the title track to The Heartbeat of the Devil, released on May 6 via Napalm Records and available now on Bandcamp and the label’s webstore. The EP follows Lord of the Lost’s 2021 Judas album, with the band continuing to perform live throughout 2022 on the Homecoming Tour, which includes festival appearances at M’era Luna, Leyendas del Rock Festival, Nacht der Helden, Summer Breeze, and Volle Kraft Voraus Festival; a full listing of live dates and ticket links can be found on Lord of the Lost’s website. 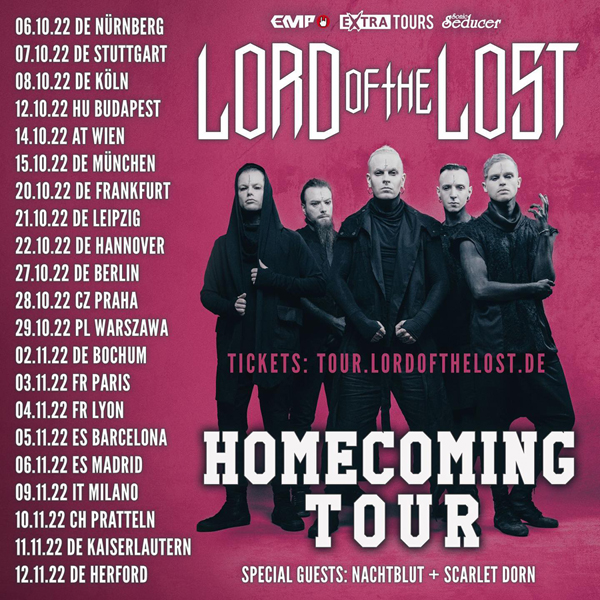 Along with Nachtblut, joining Lord of the Lost on the Homecoming Tour will be Scarlet Dorn, who has just unveiled the new single “Born to Suffer” from her forthcoming Queen of Broken Dreams record. Following the “Unstill Life” and “Falling” singles, “Born to Suffer” further showcases Dorn’s own dark rock stylings, blending elements of symphonic metal, industrial and electronic beats, and melodic pop balladry. Produced by Scarlet Dorn bassist and backing vocalist Benjamin Mundigler with Lord of the Lost’s Chris Harms, Queen of Broken Dreams is due for release on September 30 via SPV Records in digital, CD, and vinyl formats; pre-orders are available now on Bandcamp.