Lineup of bands and DJs announced for Substance 20221

Los Angeles-based promotional collective Restless Presents has announced details for the fifth installment of their annual dark underground event, Substance 2022, taking place over two nights in October at the Los Angeles Theater. “Over the years we have strived to curate unique and atypical lineups, and Substance 2022 is no exception,” states co-founder Brian Tarney, with talent and production coordinator Liz Garo going on to comment on the booking at the Los Angeles Theater, an historic multi-room venue, to be an artistic complement to the presentation of dark rock, post-punk, and forward-thinking electronic acts on the event’s lineup. In addition, the curators have emphasized the importance of representating the LGBTQIA+ community, as well as taking great measures to ensure “an international flavor,” and hosting a variety of newer and up-and-coming acts in their selection of performing artists. As such, the lineup of over 40 performers and DJs for Substance 2022 includes such legends as The Jesus & Mary Chain, Parade Ground, The Chameleons, Clock DVA, and Cabaret Voltaire’s Stephen Mallinder, as well as current stars like Pixel Grip, Youth Code, KANGA, Light Asylum, Kontravoid, Glaare, Kælan Mikla, and Boy Harsher; others on the bill include Model/Actriz, Empathy Test, Kumo 99, NITE, Placebo Effect, Sextile, Absolute Body Control, and more. A full listing of the Substance 2022 lineup, along with tickets and V.I.P. packages can be found on the Restless Nites website. The event will be taking place on Friday, October 21 to Saturday, October 22. 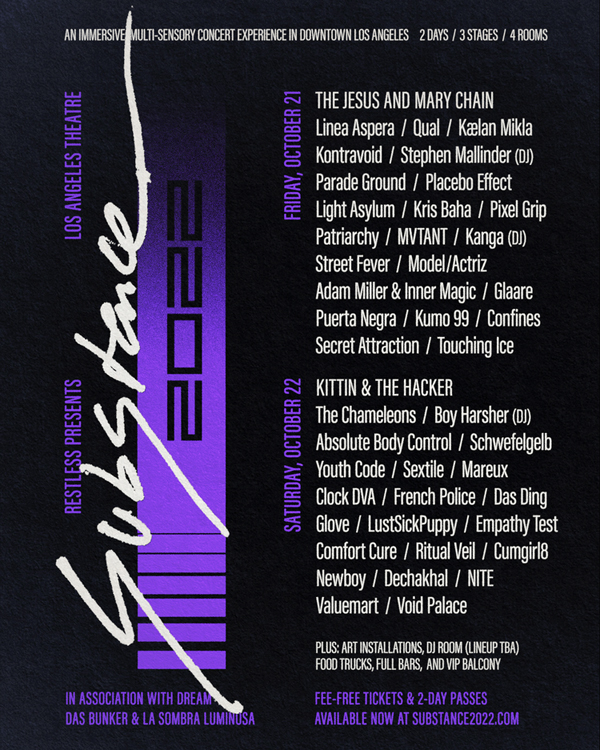