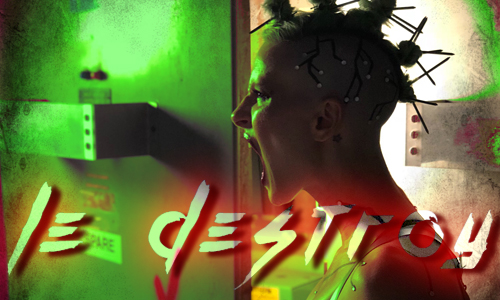 Austin based industrial/alt. rock act Le Destroy has released a new single and music video for the track “Monster.” Created in collaboration with Emmy Award nominated makeup and FX artist Meredith Johns – owner of Hawgfly Productions, Inc. and Barn Door Studio – in Austin, TX, and directed by BJ Lewallen, the video presents the dark, sexy, and danceable aspects of Le Destroy. Of its conception, the artist comments, “I love sci-fi and world building, so we’re just having a lot of fun being creative together and developing concepts and creative narratives that work with my lyrics and the overall tone, feel, and sound of Le Destroy.” She further states, “It was an awesome experience and really felt like a team and family. We’re all super pumped for the next one!”

“Monster” is the third single release from the artist’s upcoming debut EP, We Destroy, due for release on July 13; containing four tracks, all written, produced, engineered, and performed entirely by Le Destroy’s Kristina Olson, the EP is but the first taste of what Le Destroy has to offer as she works towards the creation of a full-length album. We Destroy, like the preceding singles, will be available via all digital platforms, including Spotify, iTunes/Apple Music, Google Play, and Amazon.
Prior to Le Destroy, Olson had been the founder and front woman of rock band Kristina and The Dolls. She formed Le Destroy in 2017 with the intention “to be open minded about my approach and not be married to a specific sound or end goal.”