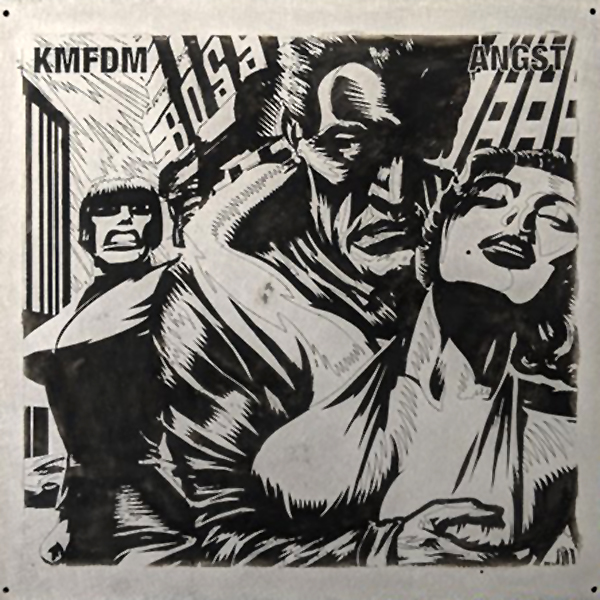 As with the band’s 1995 album NIHIL, KMFDM has now announced that the monumental 1993 album ANGST has received the vinyl remastering treatment, with pre-orders now available via KMFDM’s Fullfillment Merch Store. Limited to 1,000 copies and pressed in 45RPM 180g vinyl, the standard edition of the 2-LP remaster comes in four color variants – Metal Smoke, Angst Orange, Drug Blue, and Classic Black – with the expanded and re-ordered track list not only including the original 10 tracks, but also featuring the 12-inch mix of “Sucks,” originally released on the “Sucks” single in 1992, and the single mix of “Blood,” which was the B-side to the “A Drug Against War” single. Following in the NIHIL remaster’s footsteps, a deluxe edition of the ANGST remaster is also available, limited to 125 copies; the deluxe package includes a logo stencil, card stock poster, die-cut sticker, embossed box, and aluminum metal cover hand manufactured by Ohio based metalworker Rachel Schutt. The ANGST remaster will be shipping in late spring/summer. 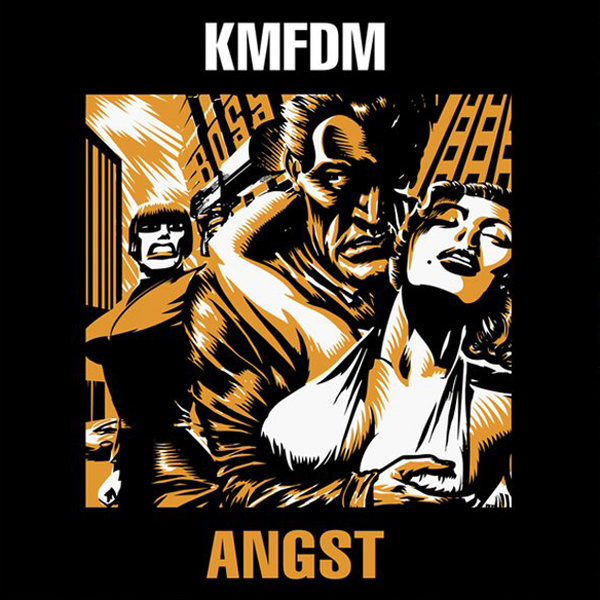 KMFDM’s sixth studio album, ANGST was originally released on WaxTrax!/TVT Records in 1993, later remastered in 2006 for Metropolis Records. The album was the band’s first to be recorded in the U.S. with engineer Chris Shepard, with Sascha Konietzko and En Esch both moving to different cities and working together again after a period of separate activity. With guitar duties shared by En Esch, Günter Schulz, and steel guitarist Mark Durante in his first appearance with KMFDM, ANGST featured a more guitar-driven sound as tracks like “Light,” “A Drug Against War,” and “Sucks” would go on to become among the group’s most beloved among fans, still making their way into live set lists today. The album also features vocalists Christine Siewert and Dorona Alberti, who took the lead on “The Problem,” while Bruce Breckenfeld provided his touch on the Hammond B3 organ. Within the first four months of its release, ANGST sold 20,000 copies, going on to sell 100,000 by the time of NIHIL‘s release in 1995. The track “Agogo” was originally recorded during the album’s sessions, later appearing as the title track on the 1998 rarities album; the 1994 ANGSTFest tour in support of the record is considered legendary in the annals of KMFDM’s live history, with support coming from fellow industrial/rock acts Chemlab and Sister Machine Gun.
2019 marks KMFDM’s 35th anniversary, with a new album currently in the works and tentative plans for a release later this year.