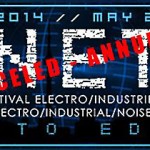 The Canadian electronic music festival Kinetik has been canceled for 2014 and for the foreseeable future, according to the festival representatives. Kinetik Productions cites a “complicated and unplanned situation,” which has not been described due to its allegedly confidential nature. A full statement is available through the festival website. “This ongoing situation has nothing to do with the Toronto venue and or with the Kinetik Festival partners that have shown nothing but full support for the festival,” says the official statement. “We are also presently working with some partners in Toronto so some of the shows (the ones that were part of tours) still happen and that Toronto fans still have a chance to see those excellent bands. We will post more about this as soon we have more information about it.” Other artists are also working to book smaller-scale shows for Kinetik goers who have already purchased plane tickets and show tickets. Refunds will begin immediately, working backwards from most recent sales.
The Kinetik Festival and Kinetik Productions were founded in 2007 as a non-profit institution by a partnership between KAO Production and [i] Prod to promote the Montreal electro/industrial scene. The festivals have featured a wide lineup of innumerable artists in the genre; this year’s festival was to include Aesthetic Perfection, De/Vision, Front Line Assembly, Leaether Strip, Suicide Commando, Caustic, Iszoloscope, God Module, Surgyn, and more. “Doing a festival of any size is an enormous undertaking…I can’t imagine how hard the decision was to pull the plug on it this year,” says Matt Fanale of Caustic and The Causticles. “It’s a major disappointment for fans, artists, and organizers alike, but I’m proud to have been a part of it and will really miss it.” Brian Graupner of the Gothsicles and Causticles adds: “I think it’s important to remember that ever since it started, Kinetik was the gold standard of North American industrial festivals from a performer’s perspective. Every band I know has more than enough nightmare stories in the clip about how xyz show was horrendously executed with late starts, awful sound, no one knowing what was going on, etc. and Kinetik was the opposite of that. The attitude in the green room, year after year, was always, ‘Holy shit, this is a tight run ship.’ I don’t know any of the details of the festival’s end, but I bring all this up because it leads me to believe that pulling the plug is not something that would have happened if it wasn’t an absolutely necessary last resort.”