Although the band has remained active with touring, solo projects, and remixes, Killing Joke hasn’t graced our ears with any new studio material since 2015’s Pylon. The Lord of Chaos EP finds the influential and confrontational musical unit taking aim at a world in disarray; revolving ritualistically around the group’s standard themes of the failure of overly complex systems and technological overload, vocalist/keyboardist Jaz Coleman explains, “I’ve never known anything like the time we are living in now; not since the Cuban Missile crisis, but now in comparison, we have multiple flash points.” Due for release on March 25, the Lord of Chaos EP features the original tracks “Total” and “Lord of Chaos,” as well as remixes of “Big Buzz” and “Delete” off the preceding Pylon record, mixed by Tom Dalgety and produced by the original lineup of Coleman, Geordie Walker, Martin “Youth” Glover, and “Big Paul” Fergusion; along with a lyric video for the opening title track, the EP acts as a precursor to a full-length album currently being worked on in Prague. Pre-orders for the EP in CD and vinyl formats are now available, with the clear and green with black splatter variants being limited to 500 copies each.

Additionally, Killing Joke will be celebrating the release of the Lord of Chaos EP with the Honour the Fire U.K. tour this Spring – beginning on March 27 in Cheltenham and concluding on April 9 in London, with stops planned for Glasgow, Birmingham, Liverpool, Newcastle, Nottingham, Bristol, and more. Tickets and additional information for the tour are available now via MyTicket. 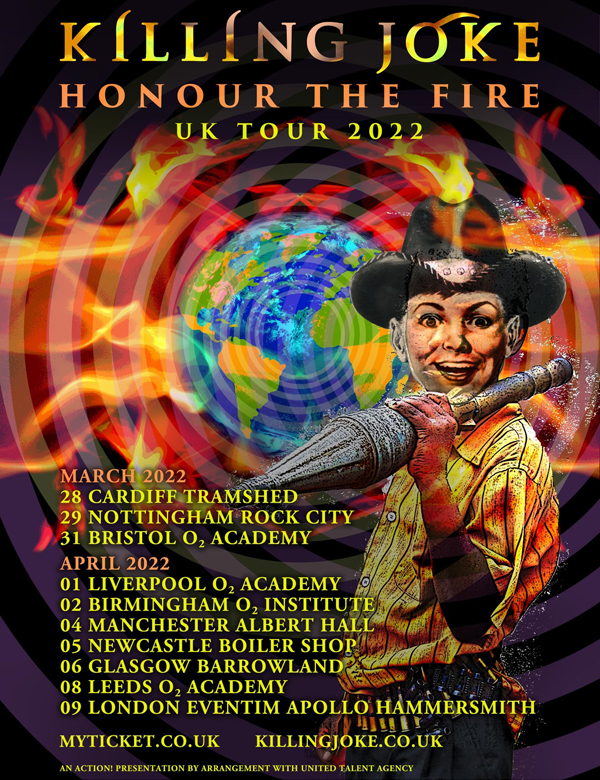