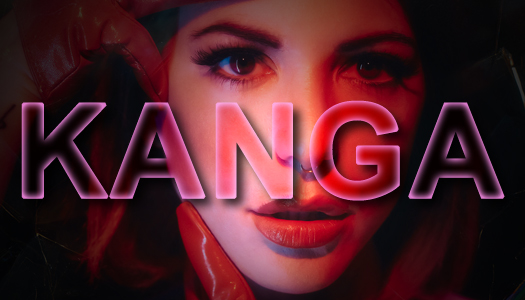 November 4, 2022 saw the release of “Magnolia,” the latest standalone single from KANGA, following up on her highly acclaimed third album. Now, she has unveiled the accompanying music video, which made its premiere today, January 20 via Post-Punk.com; directed by Steven Rosales, the video reveals a romantic tale of vulnerability and feminine strength, the visuals a lavish presentation in the tradition of Old Hollywood. “I feel like I’ve sort of grown out of this morbid angsty phase,” the artist explains, stating that “Magnolia” was an attempt at something new for her, “It’s wanting to be pretty and perfect and desirable, but also how that front can make it difficult to fully open up and let someone in. But it’s also nice to just wear pretty clothes and roll around on a plushy bed. Sometimes a girl just wants to feel pretty.” Adding to KANGA’s vision is Tiffany Trezzo – a.k.a. Miss Trezz – who provides makeup and hair styling,

Like the visuals, “Magnolia” sees KANGA shifting from the darkly-tinted industrial/pop of her past output toward a brighter sound more akin to synth and hyperpop, the single presenting the first taste of the artist’s forthcoming album. Scheduled to be released on Artoffact Records in late 2023, the album sees her working with producers Josh Franks (Once Human, Skinslip) and Dave Adrounie, with additional singles to be rolled out throughout the year. A title has not been revealed at this time for what will be KANGA’s fourth full-length album after 2021’s You and I Will Never Die, Eternal Daughter in 2020, and the self-titled 2016 debut. The “Magnolia” single is available via Bandcamp.