Kælan Mikla and KANGA to tour North America this Fall0

This past Spring, post-punk and darkwave act Kælan Mikla toured throughout Europe, supported by Artoffact label mate KANGA. Now, the prominent imprint has announced that the tour will be coming to North American shores this Autumn, with the Icelandic trio stating, “Our dearest sister KANGA will be joining us again for this adventure. The last U.S. tour in 2019 was so much fun and we can’t wait to be back with lots of new material.” Beginning on October 4 and concluding on November 5, the tour will span 29 dates, seeing Kælan Mikla and KANGA performing in Detroit, Chicago, Austin, San Diego, Los Angeles, Seattle, Philadelphia, Baltimore, New York, Boston, along with Canadian dates in Vancouver, Toronto, and Montreal. A full listing of dates and ticket links can be found on the bands’ websites. The tour sees the two bands supporting their 2021 releases – Kælan Mikla’s fourth full-length record, Undir Köldum Norðurljósum (Under the Cold Northern Lights), released on October 15, and KANGA’s third album, You and I Will Never Die, released on March 26; both albums are available in digital and CD formats, while vinyl copies of Kælan Mikla’s album are also still available. 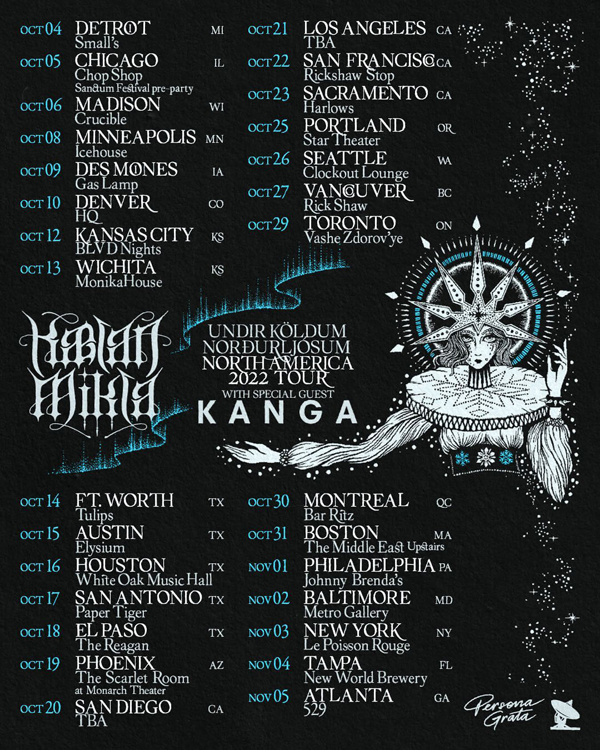