Two of Artoffact Records’ most prominent acts will be hitting the road for an extensive tour in the Spring of 2022 – Kælan Mikla and KANGA. Traveling through 12 countries across the European continent, the tour is in celebration of the Icelandic electro/post-punk trios most recent release, the band’s fourth full-length album, Undir Köldum Norðurljósum (Under the Cold Northern Lights), which was released on October 15, as well as KANGA’s You and I Will Never Die, released on March 26. The tour is set to begin on April 13 in Berlin, concluding on May 15 in Leipzig, with stops throughout Germany, Belgium, Sweden, Poland, Finland, Norway, the Netherlands, and more; a full listing of tour dates can be found on both artists’ websites. 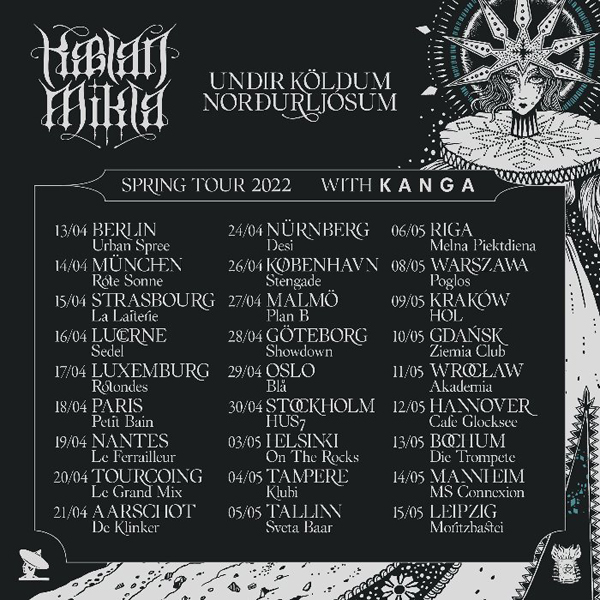 In addition, both Kælan Mikla and KANGA are featured artists on Artoffact’s new compilation Misogyny is Not a Music Genre ♀; as its title suggests, the collection covers the numerous women whose music and artistry has helped to shape the label – Artoffact states proudly that it “would not exist without the musicianship, songwriting, art design, publicity, and creative acumen of the women signed to the label, or who work for the label.” As such, the compilation also features contributions from Ayria (Jennifer Parkin), ACTORS (Shannon Hemmet, Kendall Wooding), Leathers (Shannon Hemmet), Ötzi (Gina Marie Scardino, K. Dylan Edrich, Winter Zora), Bootblacks (Ali Gorman), Wingtips (Hannah Avalon), OvO (Stefania Alos Pedretti), Encephalon (Alis ALias), Ghost Twin (Karen Asmundson), and more. Misogyny is Not a Music Genre ♀ was released today, October 22, and is available as a name-your-price item on Bandcamp.