Junksista teams up with French filmmaker for new music video0 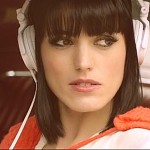 German electro act Junksista has unveiled a new music video for the song “Life is Unfair (And Love is a Bitch).” The video, available now on YouTube, was directed by Fabio Soares and Noemie Alazard and features the band’s modernized take on several fairytales from the Brothers Grimm. Band member and co-producer Diana states, “With the video, we tried to show that love can be consumed like candy – it’s a quick pleasure for some. When it’s ‘done,’ they simply move on to the next sweet thing. Others lose their heart over it.”
The video was shot in a forest near Ulm, Germany and acts as a teaser for the album Bad Case of Fabulous, due to be released on Alfa Matrix on November 8.
Junksista recently scored Fabio Soares’ short film, Woman with No Name, which led to the production of the music video.