Negative Gain Productions has done well to present audiences with some of the more exciting and creative artists in modern electro/industrial, with 2022 marking the label’s release of the IV0X10V5 debut from Detroit’s own Josie Pace, as well as the long-awaited Thoughts Beyond Words album from David Dutton under his genCAB moniker. Now, these two artists are set to embark on a tour of North America this fall, both acting as support for electro-pop act Aesthetic Perfection on the latter’s American Psycho Tour. Spanning nearly two months, the tour will begin on October 11 and conclude on November 25, with the three bands hitting Baltimore, New York, Boston, Chicago, Seattle, New Orleans, Portland, as well as Canadian dates in Montral, Toronto, and Vancouver; a full listing of dates and ticket links can be found on the bands’ websites. 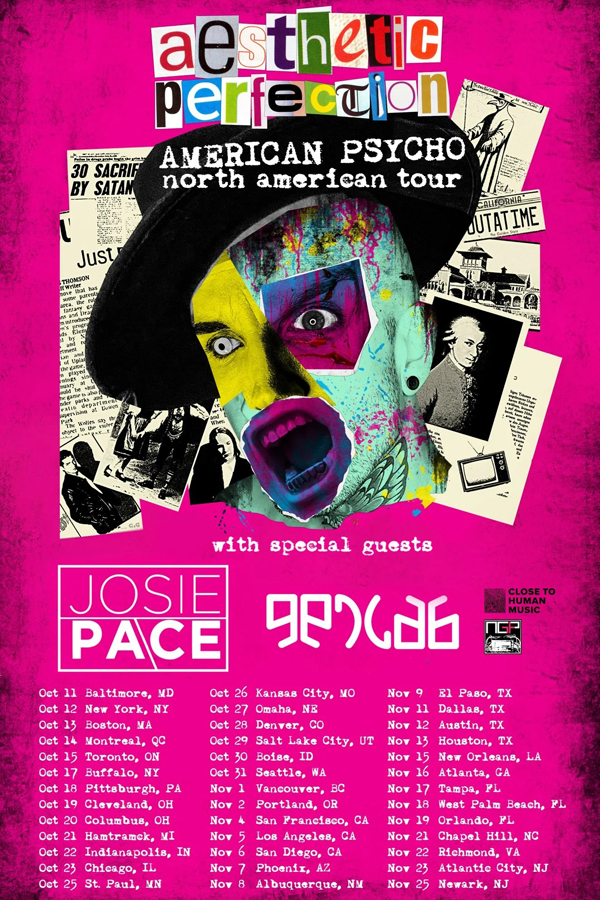 Working with prominent Detroit artist and DJ Ken Roberts, Josie Pace had gradually built up her following through numerous independently released singles and music videos before signing with Negative Gain Productions in late 2021, finally releasing IV0X10V5 on February 4. The album is available now on Bandcamp in digital, CD, and vinyl formats, with the opening track “I’m Begging You” being the latest single and video release on May 27.

Having first made waves with a series of compilation appearances, genCAB – short for Generation Cable – released the II transMuter debut in 2008, later touring with fellow electro/industrial rabble rousers Panic Lift. The first examples of genCAB’s new material came with the “Altar of Progress” single in November of 2021, followed by “Taper” in January. Produced by Dutton and mastered by Rotersand’s Krischan Jan-Eric Wesenberg, Thoughts Beyond Words was released on January 14 in digital and CD formats, marking the first new material from genCAB since the 2016 Channel the Past EP, which was produced by Aesthetic Perfection founder Daniel Graves; as well, genCAB contributed a remix to Graves’ “Bark at the Moon” single in October of 2021. Dutton has also performed as a member of Aesthetic Perfection and Life Cried, and has released music as Crown of Pity with band mate Natalie Rakes, who provides backing vocals on Thoughts Beyond Words.