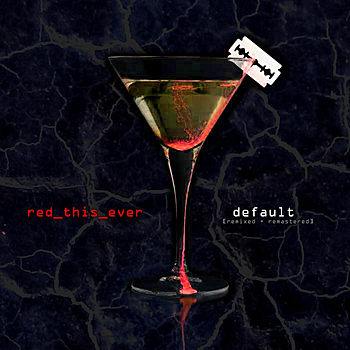 Having released his Meridian Hill debut in 2015, Jonathan Lim has teamed up with Eric Garwood – a.k.a. Iterations – for a new single in which the pair remixes Baltimore electro-pop act Red This Ever’s “Default,” originally released on that band’s 2009 Selfless album. Lim and Garwood, both former members of DC electro/rock band 23RainyDays, recreated the instrumentation to create not only a remix but a complete reinterpretation, transforming the song from its original stripped-down rock arrangment into a more uptempo version; of their approach, Garwood performed both live and sequenced drumming while Lim states that he “used a number of different synths (hardware and software, analog and digital) to combine grit and melodies with a broad sense of space.” Of the pair’s use of rock and electronic elements, Lim comments, “electronic music is as much a physical outlet as it is for listening.” The original version of the song, written by Red This Ever vocalist/programmer Roy Retrofit and remastered by Scott Radtke, is also included with the single, released on March 1 via Jade Anvil Collective. Of the song, which Retrofit had written about his deceased mother, Lim states, “The concept centered around (what I consider) the compartmentalization of relationships. In Roy’s words, we live our lives in these separate boxes and spaces – even within the same house. We go on like this even though what we’re looking for is that connection with someone else.”
The Default (Remixed & Remastered) single is now available via UK’s Juno Downloads.