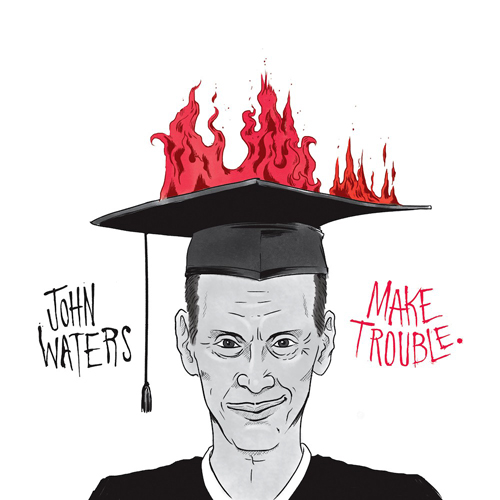 Bummed that you weren’t there to hear cult cinema legend and national trashure John Waters’ subversive commencement speech at the Rhode Island Institute of Design (RISD)? Not really the type to read the book version published earlier this year? Fear not! Make Trouble, the entire speech read by Waters himself, is now available as a digital download with a 7-inch vinyl edition due out October 6. The speech begins with Waters explaining his unique qualifications for inspiring impressionable minds. “I should say right off that I am really qualified to be your commencement speaker. I was suspended from high school, then kicked out of college in the first marijuana scandal ever on the university campus. I’ve been arrested several times. I’ve been known to dress in ludicrous fashions. I’ve also built a career out of negative reviews. And I’ve been recently called the Prince of Puke by the press and another title I’m really proud of – the People’s Pervert.” The recordings were produced by Grammy winner Ian Brennan (Tinariwen, Ramblin’ Jack Elliott, Zomba Prison Project). Digital versions are available through iTunes, Spotify, Google Play, and TIDAL; the vinyl single is available for pre-order via Third Man Pressing & Third Man Records.