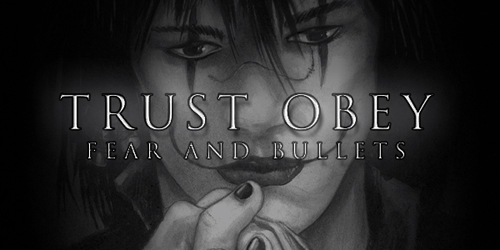 In 1994, a special edition of James O’Barr’s graphic novel The Crow was released by Kitchen Sink Press and Graphitti Designs, containing a soundtrack album created by John Bergin under his moniker of Trust Obey, titled Fear and Bullets. The album was later released via Deezal/Invisible Records in 1998 as a standalone item featuring remixed and rerecorded versions of Bergin’s brutally apocalyptic industrial/metal compositions. Now to celebrate the record’s 25th Anniversary, Bergin has released via Bandcamp both the 1994 and 1998 editions, newly remastered by Robert Rich, as well as the original 1991 demo version created for the 1989 Caliber Comics publication, culled from the very first four-track recordings. Having met O’Barr when Caliber Comics was publishing both The Crow and his own Ashes title, Bergin has said of the soundtrack, “I composed most of the music to accompany specific scenes from the comic. When it was time to write lyrics, James and I simply turned to the book and read through the scene I’d just scored. In most cases, all the text on those pages fell right into place as song lyrics.” In addition, he has also included the Sanctity Now demo originally created in 1991 by Bergin and O’Barr as a follow-up to Fear and Bullets.

If that weren’t enough, Enjoy the Ride Records has collaborated with Bergin to release a special “Devil’s Night” vinyl edition that collects the “Best Of” the original releases. Limited to 666 hand numbered copies, the pressing is split across three color variants – the two versions exclusive to the label’s webstore are the “Bloodshead” version pressed on red/black/white smash colored vinyl with an exclusive blood red center label and the black/white swirl limited to 233 copies; all 100 copies of the “Bloodshed” variant are sold out.. The third variant, a black/white split colored vinyl, is limited to 333 copies and sold exclusively through ThinkGeek. Each print of Fear and Bullets is housed in a 400gsm jacket with black flood printing, with additional bonus content including liner notes and an exlusive poster of James O’Barr’s first rendition of the The Crow character from 1980.