As live concerts and festivals are reorganizing and rescheduling, the excitement shared by artists and audience is perhaps higher than it’s ever been, with guitarist extraordinaire John 5 stating that his excitement is “amplified by a million.” Long celebrated for his musical versatility on top of his masterful playing style, he has now announced a tour of North America to take place from August 10 to September 3, 2021; joining him in support will be fellow string-slingers Jared James Nichols and Sarah Longfield, along with hard rockers Black Satellite. A full listing of tour dates and venues can be found on John 5’s website, where tickets can be purchased. In addition, he is currently working on a new solo record to follow 2019’s Invasion, with plans for a release later this year; most recently, John 5 also appears on Rob Zombie’s The Lunar Injection Kool Aid Eclipse Conspiracy album released in March of this year, as well as the “I’ve Been Everywhere” single from the Liam Neeson film The Ice Road, in which the guitarist worked with Zombie, bassist Nikki Sixx, and drummer Tommy Clufetos in the supergroup The L.A. Rats. 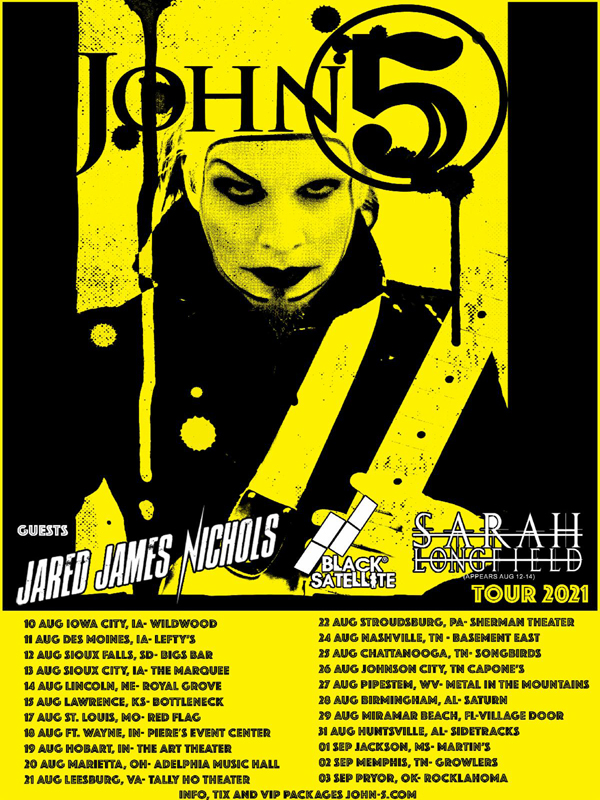 Based in Nashville, Jared James Nichols is heralded for his unique blues/rock style; he has toured and performed with the likes of Living Colour, Zakk Wylde, Blue Öyster Cult, L.A. Guns, and more, and holds the distinction of being one of three guitarists – along with Slash and Dave Mustaine – to be given the title of Global Brand Ambassador for Gibson Guitars.
Sarah Longfield is a celebrated YouTuber and multi-instrumentalist whose two-handed tapping style has placed her at the upper echelon of modern guitarists. She has toured both as a solo artist and with her band The Fine Constant, suppoting the likes of Marty Friedman, Polyphia, and Angel Vivaldi.
Formed in 2017 by vocalist Larissa Vale and guitarist Kyle Hawken, Black Satellite is currently working on the Aftermath sophomore album to follow up on the band’s acclaimed Endless debut; from the new album is the “Void” single, released in March.