It has been a momentous year for I Ya Toyah following the release of the electro/industrial act’s Code Blue debut, culminating now in the release of the “Glass Eyes” single. Now available to purchase via Bandcamp and with a music video due to make its premiere on November 15 via The Spill Magazine, the song addresses the complex issues of personality disorders and the unconscious mind, with I Ya Toyah’s Ania Tarnowska explaining that the song is “about mental crash as a consequence of a chain reaction caused by social expectations, pressure, and fear of failure, resulting in procrastination, inaction, and… insanity.” For this single, “Glass Eyes” is presented in a remix form created by The Joy Thieves, the Chicago industrial/rock collective of which Tarnowska is a member; commenting that the original track was his favorite on Code Blue, band founder Dan Milligan expresses his excitement as having had the opportunity to remix the song. Of the claustrophobic visuals to be presented in the impending video, Tarnowska states that they “best represent that struggle in visual form and hopefully engage the conversation about mental health and our abilities to explain personality, motivation, and mental disorders.”

The Joy Thieves remix of “Glass Eyes” follows up on the previous remix singles – “Flashback” remixed by Rhys Fulber and “Puppet” remixed by Adoration Destroyed, all released this year. Following the release of Code Blue in October 2018, I Ya Toyah conducted a tour in support of the album with fellow midwestern industrial act Zwaremachine, the pair collaborating on the “Smile That Killed a Country” single. Tarnowska was then featured as a member of The Joy Thieves, first in the “This Will Kill That” music video on keyboards, and then taking on the lead vocals for the cover of Siouxsie & The Banshees “Cities In Dust.” She appeared as a guest alongside fellow Joy Thief Matthew Clark on an episode of the MKUltraSound weekly podcast hosted by MK Ultra Magazine editor/publisher/founder Alex Zander, which can now be heard via YouTube and SoundCloud. Clark and Dan Milligan also appeared in an earlier episode of the podcast to promote the band’s debut.

In addition, I Ya Toyah has been announced as a support act for Pigface on the band’s first tour in 14 years, opening for 10 consecutive shows from November 20-30; she will also be providing tech support and joining the eminent “supergroup” onstage as a special guest. “I can’t contain my excitement for this,” Tarnowska exclaims, stating that she is “beyond honored” to be part of the tour and that she is particularly anxious for the November 30 performance at the historic Thalia Hall opera house in Chicago; “It is a dream to perform there and for all my beloved Chicagoans that are part of industrial music culture.” A full listing of tour dates can be found on the bands’ websites. 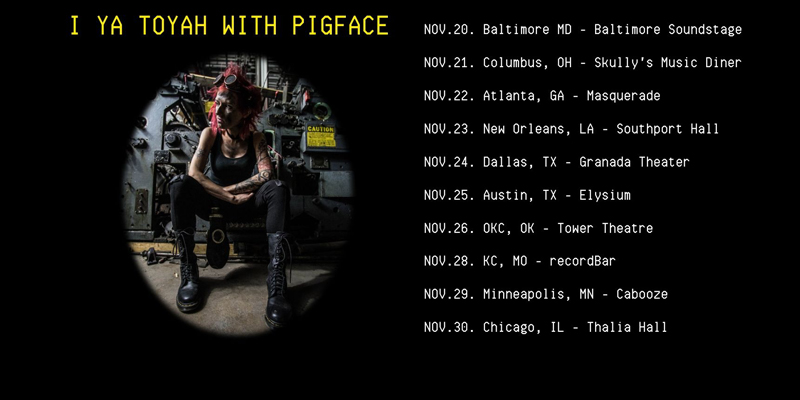