In June of 2020, during the first summer of the pandemic, Hate Dept. returned to present the music video for “Other Side,” the band’s first new material in six years and hinting that it would be the first taste of a forthcoming album. Now, Steven Seibold is taking the band to the stage for the first time in three years to join forces with fellow practitioners of pulverizing post-punk Bellhead for a limited series of live dates. The first two dates will see the bands performing at Sk8bar in St. Joseph, MO on August 26 with Torn Asunder, followed two days later at Lefty’s in Des Moines, IA; the two bands will then proceed on their own schedules of live shows, before reuniting at the Liar’s Club on November 4 in Chicago with Won’t Stay Dead, and then the next night at Da Bar in Milwaukee, WI with Lockjaw and Am.psych.

Additionally, Hate Dept. will be appearing at Machinefest 5 in Wellington, CO on August 27; with tickets now available, the event follows up on the band’s last performance at Machinefest 4 in 2019, this time sharing the stage with Cyanotic and CHANT. Additional info can be found on the Machinefest 5 Facebook event page, presented by Machinewerx, Motoman Project, and Riveting Music. Meanwhile, also on August 27, Bellhead will be performing at Sinkhole in St. Louis, MO with Gray Robert and Community, The Cult Sounds, and Captain Spacetime. These shows will be supporting the band’s most recent release of the Nothing As It Seems EP this past February; the EP features remixes of the title track by Stabbing Westward, I:Scintilla, Dean Garcia of Curve and SPC ECO, and Shaun Brice of Loveless Love. Hate Dept.’s last album was 2013’s New Ghost, followed by three remix companions, and Seibold continuing to work on other projects including Muet and Standalone. 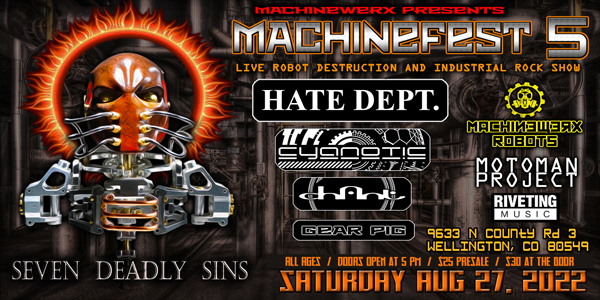