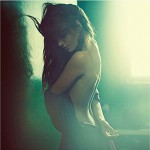 Japanese electro/industrial/rock band Harshrealm has released a new digital single, featuring two mixes of “Everything You Have Said” off the band’s 2012 [Fahrenheit / Vers la Flamme] EP, and a new remix of “Cruel Division” from the [She/Underwater] debut album. The single is available via numerous online outlets, including iTunes, Amazon MP3, and more, with plans to release a new EP and a second full-length album on physical CD and digital formats in the coming months.
Furthermore, the band will be performing at several dates in its native Japan, with plans to embark on a U.S. tour yet to be announced. More information can be found via the band’s website. Spearheaded by vocalist/keyboardist FINN, Harshrealm now features the lineup of Kuroki -KuRo- Tsutomi on bass along with new members and local musical heroes Shin-H on guitar, and Tatsuya Yagami on drums/percussion.
Based out of Fukuoka, Japan, and first appearing in 2006 with the [Harshrealm/Strange Days] EP, the band has collaborated with the likes of Razed in Black’s Romell Regulacion, Roman Marisak of Professional Murder Music, and Slick Idiot/former KMFDM members Günter Schulz and En Esch.