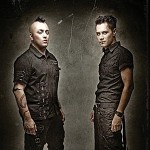 Italian futurepop duo XP8 has fallen on difficult times, as made apparent from the band’s most recent announcement. “XP8 has always been a, let’s say, less than lucky band, and it seems like luck is not on our side this time either,” summarized co-founder Marco Visconti. Visconti posted the following to the XP8 Facebook: “These days, Marko (the not bald half of XP8) got offered a new job in a very good position, and he decided to take it; to be fair with all of you, I might have made the exact same choice. This drastically changes the outlook for XP8 as a band; we just cannot go on a proper tour anymore, one that lasts more than a mere weekend, and so we need to reconsider pretty much everything we have planned for the next year and the future.”
These drastic changes include the cancellation of the XP8 North American tour and the delay of the album Adrenochrome until June of this year. “You will still see the announced ‘bigger project’ we hinted and teased about, set to release along with the album,” Visconti assured. “It will debut in a couple of weeks along our newly revamped website.”
Marco Visconti insists that the band is not quitting, reassuring that they will still play scheduled shows in Antwerp, Oslo, Calgary, and London. “I would be a liar if I wouldn’t tell you all that I personally feel like we kinda are, since I always wanted ‘more’ for this band and we won’t be able to achieve it now,” Visconti added. “At least not in the terms I wanted it.”
In response to this, Marko Resurrection wrote to Facebook: “We want to be honest with you guys, and in practice the chances of us embarking on anything longer than one week from now on are really small. In this day and age, this is a serious limitation to the development of the project, hence why Marco feels like we’re quitting to a certain extent. But rest assured this is not the end of the line for XP8.”