One of modern music’s most celebrated and versatile front men, Greg Puciato has announced a special livestream event to take place on December 11 at 3:00pm PST. Titled Fuck Content and created in collaboration with Jesse Draxler, Puciato explains that the program will be a marriage of different mediums – live performance, studio footage, visual art, and more – “a lot of different elements together,” with the intent of presenting what the artist calls “the modern equivalent of a VHS release you would have bought from a band decades ago, but with more of an arthouse sensibility.” He goes on to state further that the concept originated as a visual companion to tie in with Puciato’s Child Soldier: Creator of God solo album, released on October 1, explaining that he and Draxler landed upon the idea of and emphasis on “content” as revolting, with substance as its opposite. “We were both ranting about it and at one point I said, ‘fuck content,’ and that was the spark we needed to build up the fire to start putting this together,” he says. Furthermore, he considers Fuck Content to not simply a way to placate the audience’s needs during the pandemic, but that this is as much a release as any album; he concludes, “It’s something we sank our teeth into creatively, as much as a record, and I’m excited for everyone to see and hear what we’ve got to show them.” Co-directed by Jim Louvau and Tony Aquilera, tickets for Fuck Content are available now via the Federal Prisoner website, along with a selection of limited edition merchandise exclusive to attendees, including vinyl copies of Child Soldier: Creator of God and the Fuck Content live album, Blu-ray, a signed and numbered poster, and more; the show will remain on-demand for 48 hours following the initial broadcast. 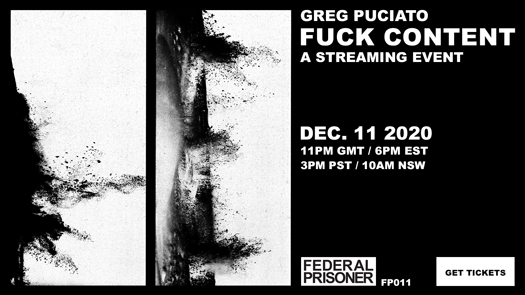 Besides his new solo project and fronting electronic/coldwave act The Black Queen, Puciato was best known as the front man for The Dillinger Escape Plan and is currently also a member of the metalcore supergroup Killer Be Killed with Max Cavalera (Soulfly, ex-Sepultura), Troy Sanders (Mastadon), Benjamin Koller (Converge), and Juan Montoya. The band released its sophomore album Reluctant Hero on November 20 via Nuclear Blast to widespread acclaim. Additionally, Puciato is co-founder of the Federal Prisoner imprint with Draxler, the two having collaborated on numerous projects including each other’s recent solo outings, with Draxler’s audio/visual Reigning Cement album also featuring the likes of Planet B, TR/ST, Chelsea Wolfe, Surachai, and Uniform.