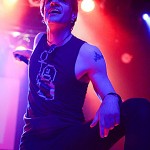 Chicago based electro/industrial artist The Gothsicles launched and completed its Kickstarter campaign for the new album Squid Icarus in three hours on August 27. The album is set to be released in December of this year on Negative Gain Productions. The campaign officially ends September 26.
Brian Graupner speaks to ReGen regarding the success: “Hot coffee! This got through faster than Barry Allen slamming Red Bull in a hypercube.”
Perks for the Kickstarter include signed CDs, wristbands, production credits, a new T-shirt designed by Angelspit’s Zoog Von Rock, special DJ appearances, and a chance to get the one of a kind armor worn on the cover of Squid Icarus; stretch goals include making a mobile game based on the band and the new release and blouses, with more to be announced.