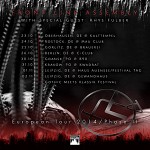 Front Line Assembly has announced a string of German and Polish tour dates, beginning October 23, with former member Rhys Fulber (Conjure One). The tour concludes with the Gothic Meets Klassik Festival on November 1 and 2, with FLA joining Mono Inc, Sucide Commando, and others on November 1 and the Orchester der Philharmoie Zielona Góra under the direction of Czesław Grabowski on November 2. Fulber left Front Line Assembly in 1997 to pursue other projects, including Conjure One and Fear Factory, rejoining again in studio-only capacity from 2003 until 2008. FLA released its latest album, Echoes, in May through Metropolis Records.