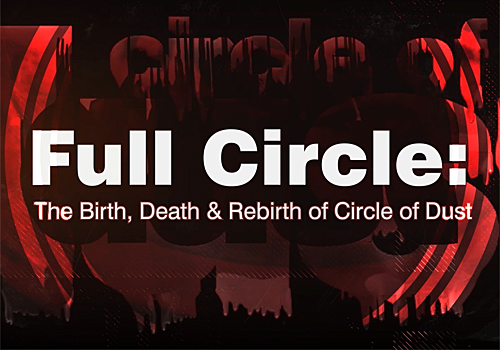 Detroit based electronic imprint FiXT has announced the release of a new documentary chronicling the history of Circle of Dust – the experimental industrial/metal project from Klayton (also of Celldweller and Scandroid). With a release date of September 21 in digital HD and DVD formats, Full Circle: The Birth, Death & Rebirth of Circle of Dustis assembled from archival photos and VHS footage, much of which has never been released to the public, along with over 30 interviews to offer a comprehensive document of one of the music world’s most exciting and aggressively creative entities. From the project’s inception and first record deal to the subsequent legal battles that led to the band’s dissolution, and finally culminating in the resurrection of Circle of Dust in 2015, Full Circle is not to be missed! The documentary will also be available in a two-DVD set with bonus features including four hours of additional footage, VHS bootlegs, and music videos, as well as mini-documentaries of the band’s gear and production and of the Argyle Park side project.

Circle of Dust recently released the alt_Machines remix companion to the 2016 comeback album Machines of Our Disgrace on June 1, preceeded by the “Dust to Dust” single in December of 2017.