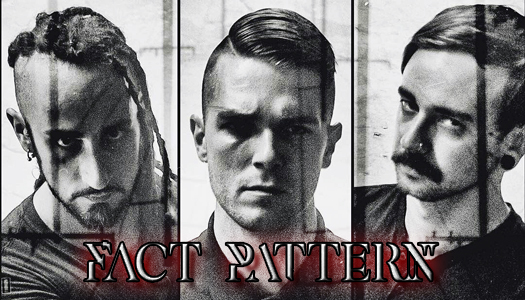 Los Angeles industrial/doom metal trio Fact Pattern, after releasing two singles, has announced the completion and release of a new album, titled Fallen Language. Featuring nine tracks, including singles “A Form to Be” and “My Guard Down,” Fallen Language marks the band’s full-length debut, due for release on May 10 via metal imprint Black Voodoo Records. The record follows up on Fact Pattern’s 2017 Structures EP and will be available in CD and digital formats, with plans for a vinyl edition to follow several weeks later. Formed in 2012, Fact Pattern has garnered a sizeable following in Los Angeles and beyond, performing as support act for Old Iron and Author & Punisher to name a few. The “My Guard Down” single was released in September 2018, with “A Form to Be” following in December; both are available to purchase via Bandcamp, with music videos viewable on YouTube.