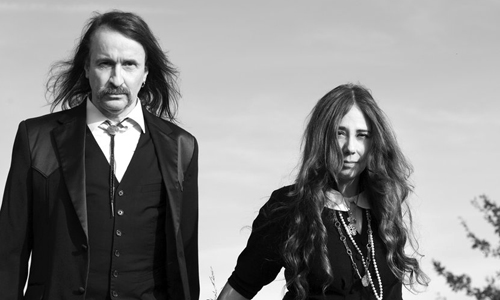 Hackedepicciotto – the duo of Danielle de Picciotto and Alexander Hacke – will be embarking on a tour of the United States from December to February, with the core of show based around songs from the pair’s late 2017 album Menetekel. Both musicians have a rich history of musical experimentation, with Hacke best known for his work in pioneering industrial group Einstürzende Neubauten, and Picciotto a co-founder of the Berlin Love Parade electronic music festival, author, director, and member of Crime & the City Solution (also with Hacke) and Space Cowboys (with early Neubauten member Gudrun Gut). Among Picciotto’s arsenal of unorthodox instruments are the Hurdy Gurdy, auto harp, and the kemençe, while Hacke is an accomplished bassist, guitarist, drummer, and throat singer.

The tour begins on December 5 in Jersey City, NJ until December 15 in Baltimore, MD, with additional dates covering the West Coast and Southern United States to follow; a full listing of tour dates can be found on the Hackedepicciotto website. Menetekel was released in December of 2017, and has been heralded as a darker outing than its predecessor, Perseverantia, as the duo worked to “mankind’s collective despair over the state of the world today into a monumental symphony of sound, twirling and twisting into a biblical frenzy.”