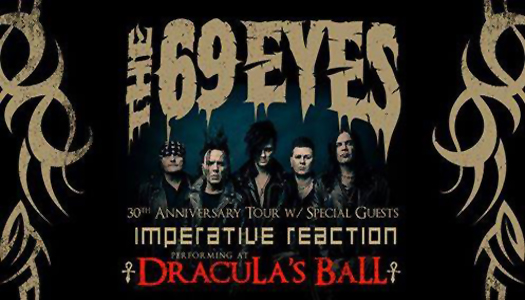 The eminent gothic/industrial dance party Dracula’s Ball will be returning on Saturday, May 18, with performances by multi-platinum Finnish goth/rockers The 69 Eyes and a return appearance from California electro/industrial band Imperative Reaction. Coinciding with The 69 Eyes’ 30th Anniversary Tour, this marks the return of Dracula’s Ball after the unfortunate cancellation in March due to the absence of headlining German synthpop act And One, who were denied work visas in the U.S.; the event’s coordinators have commented, “Before you ask: Yes, The 69 Eyes already have approved work visas!”
Dracula’s Ball is open to all ages, but you must be over 21 with photo ID to drink. As is customary, costumes and formal wear are encouraged, but not mandatory. Tickets are available now at The Trocadero Theatre box office, Digital Underground, Ticketfly, and IsoTank.com, and will be limited to 2/3 of the usual venue capacity to leave plenty of room form dancing. Small, personal cameras are permitted, but larger cameras require advance permission.