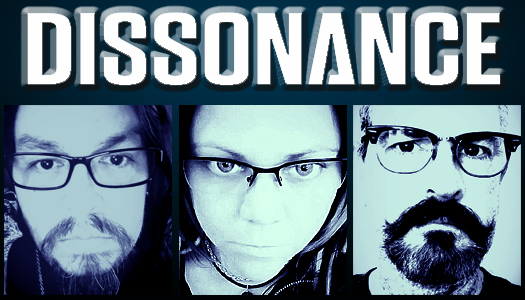 Navigating through the electro/industrial scene can be a trying and tumultuous prospect, but Dissonance founder/vocalist Cat Hall has proven more than up to the task, guiding the band through a myriad of stylistic shifts and acquiring a contingent of eminent collaborators. Something Unforgivable marks the group’s latest full-length effort after a period of several smaller EP and maxi-singles; showcasing eight brand new songs and four supplementary remixes, the album continues to demonstrate the project’s diversity and directness, with Hall working primarily with James Reyna (Melodywhore) for some of the more rhythmically energetic, sonically abrasive, and vocally aggressive material Dissonance has yet created, its themes addressing toxicity, media manipulation, environmentalism, and a world gone insane. “We spent over a year trying to get this fucker together,” Hall comments on the album, “I get impatient during the process as soon as we finish a song – I get excited about it and want to celebrate it, so waiting while we compiled this body of work was a challenge.” Contributing on various tracks are Dissonance regulars Glenn Kirchner, Jon Von Herrmann, and Rath Campbell, along with newcomers Mike Nolen and Craig Drabik, with album track “Catastrophic” featuring additional vocals by Martin King (Dogtablet), with Hall stating that “the sound incorporates all the emotion you’ve come to expect.” Something Unforgivable was produced and mastered by Paul Robb (Information Society) and is due for a December 18 release via Hakatak International, with ReGen set to premiere a full album stream on that date.