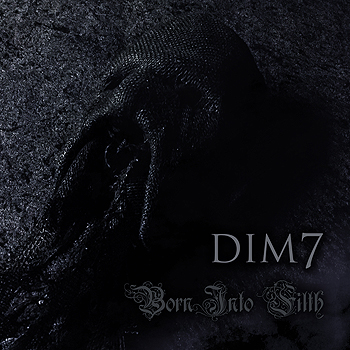 DIM7 has released a new music video for the track “Born (Into Filth),” directed and edited by Matt Zane of Lord Zane Productions. Produced and mixed by songwriter/guitarist Alex Crescioni from his own Stygian Sound studio, the song is the first single off the band’s upcoming BATS EP, showcasing a doom/gothic metal atmosphere, which the song and the explicit video convey marvelously. DIM7 is currently a studio project consisting of Crescioni and drummer Jorden Mitev – the two musicians, along with director Zane, are also members of Los Angeles industrial/metal band Society 1; the band has stated that there are no plans to tour or perform live, with Crescioni commenting, “If a worthwhile show or tour offer presents itself, I will definitely consider putting a full live band together and making it happen.” He further states, “As a metal artist, I’m looking to continue producing and releasing music independently. It’s my absolute favorite part of the process of being in a band.” The song was mastered by producer/engineer Chris Collier of CMC21, whose credits include Lynch Mob and KoRn, while Zane’s directorial credits include the likes of John 5, Orgy, Wayne Static, and Dope. The single is now available to download via iTunes.