Deaf Club has revealed the third music video from the hardcore/noise act’s Bad Songs Forever EP to precede an upcoming series of live dates. “But Does It Fart?” further presents the group’s savage and sardonic approach with a barrage of blastbeats and virulent vocals, with the video adding a touch of wit and whimsy; edited and assembled by regular visual collaborators Displaced/Replaced, the members of Deaf Club appear as Muppets – created by Tamara Becker – against a backdrop of divergent imagery that matches the cacophony of the music, the footage filmed by Roger Lopez as the audio references Jim Henson’s iconic creations in the band’s own mangled fashion. “But Does It Fart?” follows the videos for “Broken Face” and “If You Eat a Rat, It Might Taste Good,” also from the Bad Songs Forever EP, released on May 6 by Three One G Records, and available now in digital, vinyl, and cassette formats via Bandcamp and the label’s webstore.

As stated, the video also acts as a prelude to Deaf Club’s upcoming tour with fellow practitioners of experimental hardcore/noise, legendary Japanese band Melt Banana. The two bands will be performing a run of eight dates from September 30 to October 8, followed by six dates the next month from November 8 to November 13; stops on the tour include Sacramento, Seattle, Portland, Ventura, Phoenix, Tuscon, San Diego, Hollywood, and more. Deaf Club will also be playing two solo dates in Long Beach on September 29 and in Berkeley on October 2. A full listing of tour dates with ticket links can be found on the bands’ websites. 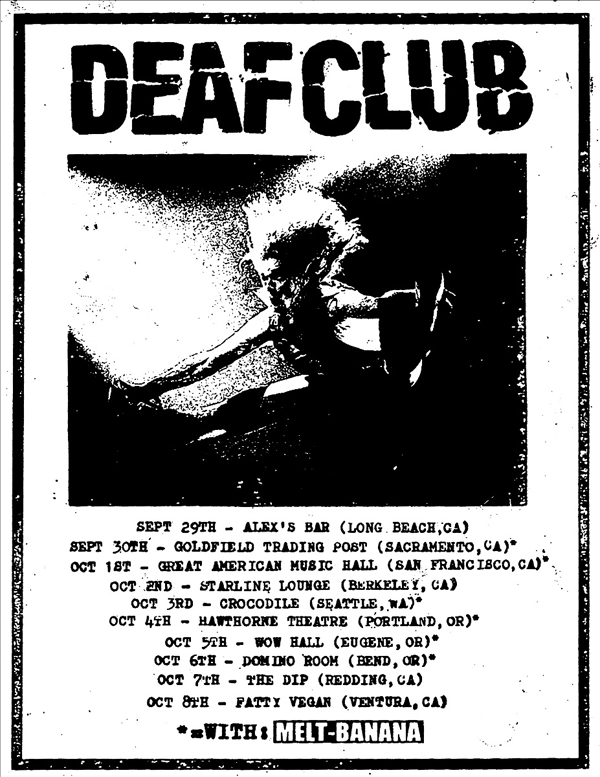