It has been nearly a full decade since Dead Can Dance conducted a tour of North America, with the band’s last appearance on the continent having taken place in April of 2013 at Coachella Festival. Now, the legendary duo of Lisa Gerrard and Brendan Perry will be rectifying that with the announce of A Celebration – Life & Works, taking place in 2023 from March 24 to April 22; as the title suggests, Gerrard and Perry will be performing – with the assistance of a full backing band – a set that features selections from classic 4AD albums like The Serpent’s Egg (1988), Aion (1990), and Into the Labyrinth (1993), as well as tracks from the latest Dead Can Dance album, 2018’s Dionysus. Spanning 17 cities across Canada and the U.S.A., the tour follows up on plans for a North American tour that had been cancelled due to the pandemic, originally rescheduled for late 2021; as the band’s first live shows since 2019, Dead Can Dance is currently midway through the first of a two-legged European tour for the remainder of 2022. Tickets for A Celebration – Life & Works will go on public sale from 10:00am local time on Friday, June 10, and can be found on the Dead Can Dance website. 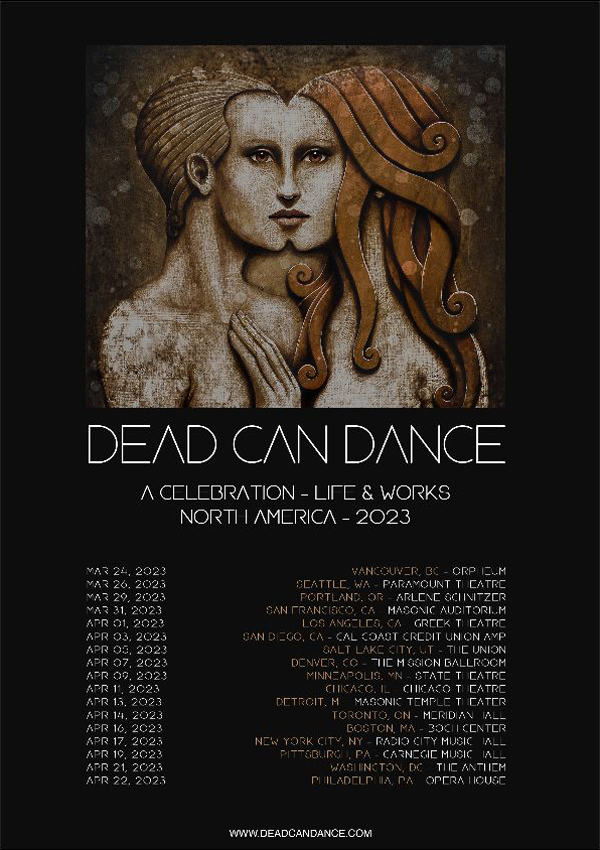