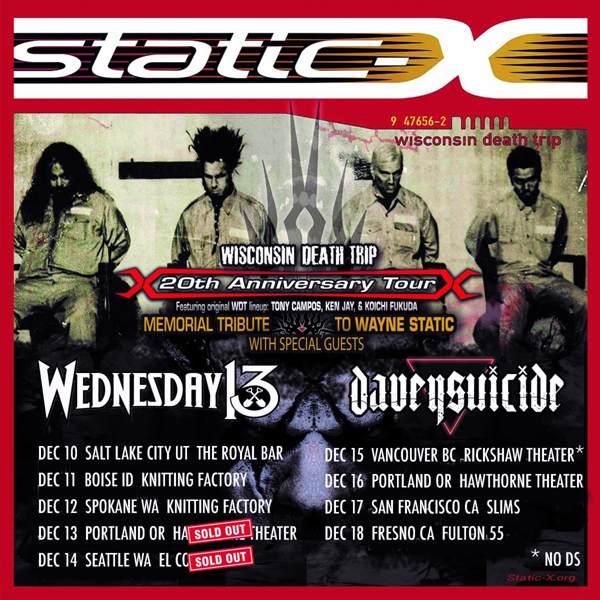 With a new album nearing its release, Davey Suicide will be treating West Coast audiences to the band’s own brand of industrialized goth/rock as a supporting act for Static-X and Wednesday 13 on the second leg of Wisconsin Death Trip 20th Anniversary Tour. Beginning on December 10 in Salt Lake City, UT and concluding on December 18 in Fresno, CA, Davey Suicide will be paying homage not just to the life of Wayne Static, but to the two bands who took the quartet on their first two tours in 2012; front man and band namesake Davey Suicide comments, “We’re thrilled to be a part of this tour and can’t wait to debut new songs off our upcoming album.” A full listing of tour dates can be found on the band’s website.
Due for release on January 24, 2020 via Out of Line Music and InGrooves, Rock Ain’t Dead marks the fourth full-length album from Davey Suicide, with mixing and production provided by Charles Kallaghan Massabo (Falling in Reverse) and mastering by Shawn McGhee (Five Finger Death Punch, Papa Roach). Featured on the album are guest performances by Gustav Wood (Young Guns), Lexus Amanda (Blacklisted Me), Hyro the Hero, and Telle Smith (The Word Alive), the latter of which appearing on the album’s first single, “Medicate Me,” which was released on September 20 with a music video directed, filmed, and edited by Vincente Cordero of Industrialism Films. Most recently, the album’s second single and title track had premiered via Alternative Press; the video – directed by Richard Villa III for Exhibit A Gallery Production – depicts a dystopian Los Angeles in the year 2039, when rock music and all forms of artistic expression and freedom are deemed socially toxic and a threat to a sterile order, with creativity being relegated to an illegal Drug Enhanced Virtual Reality.