VampireFreaks has announced the new dates and band lineup for Dark Side of the Con 4; originally scheduled to take place in 2020 for a weekend in March and subsequently postponed to September, the event has now been confirmed to be occurring on the weekend of April 1-3, 2022 at The Sheraton in Parsippany, NJ. Adding to this momentous occasion is the presence of Los Angeles synth/rock band Orgy as the headliner, sharing the stage at long last with Julien-K, the band founded by former Orgy members Ryan Shuck and Amir Derakh; Julien-K was among the numerous bands booked for the original lineup, along with The Birthday Massacre, Stoneburner, God Module, Bella Morte, FGFC820, Ego Likeness, CHMCL STR8JCKT, Ghostfeeder, Astari Nite, The Gothsicles, 00tz 00tz, Die Robot, Peter Turns Pirate, Abbey Death, Cliff and Ivy, The Rain Within, DaGeist, Methodical, Red Lokust, and Tragic Impulse. Joining the lineup for the newly rescheduled event will be Assemblage 23, Xentrifuge, Panic Lift, Danny Blu, The Long Losts, and V is For Villains, while Echo Black is no longer part of the event; several of the performing acts were part of the Dark Side of the Con’s free livestream in April 2020. Also returning will be a live bats exhibit by NJ Batman, performances by anti-conjurer Dan Sperry and magician Jeffrey Jene, along with the Goth Sloth Gals burlesque, dance, and trapeze act; DJ dance parties will be held until 3:00am or each night, with over a hundred vendors, and more than 50 panels, presentations, and activities. Full details on the event, including links to purchase tickets via EventBrite can be found on the Dark Side of the Con website. 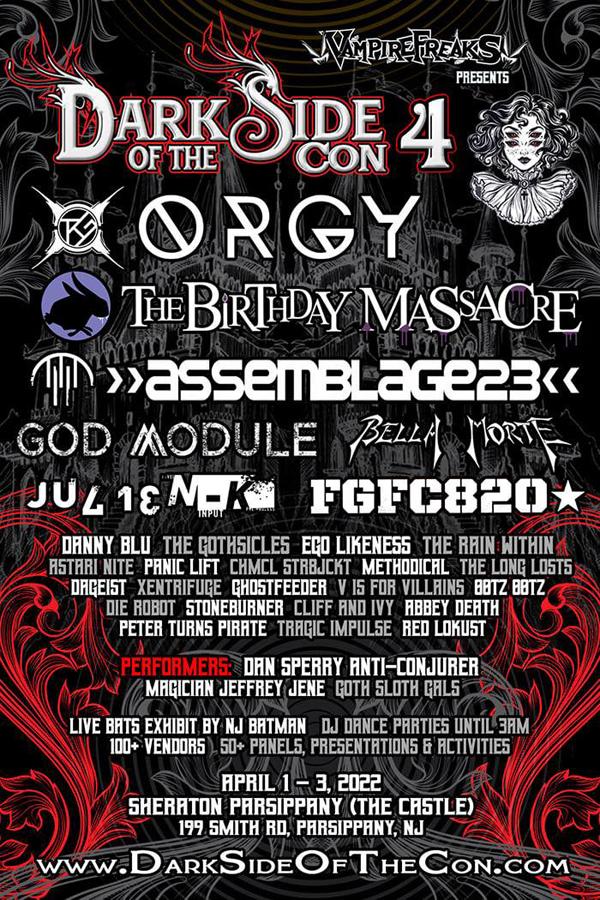