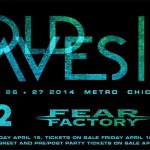 Showrunners Jason Novak and David Schock have announced the third annual ColdWaves festival to take place in Chicago on September 26-27 at the Metro, in cooperation with the Hope for the Day charity to raise money and awareness for suicide prevention. A teaser video for ColdWaves III has been posted to YouTube, hinting at the headliners for this year’s festival. Novak then went on to say, “We are proud and privileged to have another shot at building something special for industrial fans here in Chicago.” He also said, “I think this year’s combination of new talent and classic favorites is going to make people very happy,” adding that “Jamie would have most definitely approved (of this years line up).”
The ColdWaves event began in 2012 as a tribute for Cracknation’s Jamie Duffy following his death in July of that year. Several of the acts that have performed at the last two events include Hate Dept., Skrew, I:Scintilla, The Clay People, BILE, 16volt, Cyanotic, Prong, Final Cut and Cocks Members (featuring past members of Revolting Cocks), along with several acts from the Cracknation roster.
Burton C. Bell (Fear Factory, Ascension of the Watchers) appeared at the 2013 ColdWaves II event as a special guest. Novak also includes, “Front 242’s ‘Commando’ 12-inch is the first industrial dance record I ever bought, and it changed my life…”