The cancellation of so many concerts, tours, and festivals due to the pandemic, along with the closings of numerous venues has left many saddened at the uncertain state of the music scene. Thankfully, such events have galvanized many artists, promoters, and venues to take actions to prevent a total collapse with livestreams and virtual events proving to be a viable solution. Since its inception in 2012 to pay tribute to fallen brother Jamie Duffy, ColdWaves has become a beacon for the industrial and post-punk musical community, championing causes for suicide prevention and mental well being while also bringing together the best of the past, present, and future of underground music; as such, the postponement of this year’s ColdWaves IX to next year felt like a major blow to the scene. But now, ColdWaves has waved a rousing middle finger at COVID-19 with the announcement of its first virtual event; taking place over the course of three days on the weekend of September 18-20, the 2020 “Lost Weekend” will be a free livestream event via Twitch. “Regardless of the current struggles our industry family and friends are enduring,” says founder and organizer Jason Novak, “we realize how much ColdWaves means to so many people every September, since Jamie Duffy’s passing in 2012 that inspired it all. We felt the need to do something, anything, to try and connect this passionate fan base during our ‘Lost Weekend,’ and we are grateful to the artists who contributed in such a dark time. Hopefully there is enough goodwill and gas in the tank left to generate some fundraising revenue for the Metro staff and Darkest Before Dawn, as we all continue to fight to save our industry.” 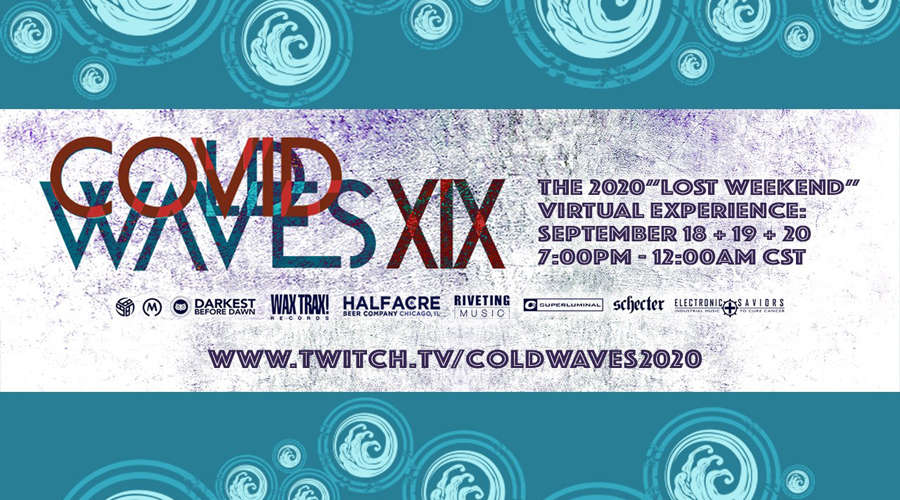 Featuring several hours of programming nightly, beginning at 7:00pm CT, the “Lost Weekend” will showcase exclusive content, rare and never-before-seen video performances, artist-driven auction items, and special DJ sets and guest appearances. Additionally, ColdWaves will release in conjunction with the event a limited edition compilation album showcasing numerous festival alumni, with Stabbing Westward appearing with a cover of The Cure’s “Burn” from the 1994 soundtrack for The Crow; the compilation will be available to purchase on the ColdWaves website and the Cracknation Records Bandcamp, with the CD pressing available in limited quantities. Proceeds from all sales will be donated to a special GoFundMe campaign for the staff of Metro Chicago, the legendary venue that has hosted ColdWaves since 2013, along with the Darkest Before Dawn charity, which provides support to the nightlife community; donations can also be made throughout the livestream. Full and final programming details will be announced on the “Car Con Carne” show with James VanOsdol on Thursday, September 10. Among the bands currently slated to appear on the “Lost Weekend” are Chris Connelly, Meat Beat Manifesto, The Young Gods, Severed Heads, Ash Code, and more. Sponsors and affiliates include Schecter Guitars, WaxTrax! Records, Electronic Saviors, Riveting Music, Superluminal Productions, and Half Acre Beer Company. ColdWaves IX has been rescheduled to occur on September 24-26, 2021, with the full band lineup for the in-person event yet to be finalized.

In addition, Cracknation Records has released the third full-length offering from post-metal band CZAR, titled Gore en Regalia. The album follows 2013’s No One Is Alone If No One Is Alive, with the band members proclaiming this to be their final output, culled from numerous demos and incomplete recordings that had remained virtually untouched until the 2020 lockdowns gave the band the opportunity and the impetus to bring them to fruition. “While one can never say never, multiple timelines, lifelines, statelines, and harlines have brough the three members of CZAR – Dan Brill, Jason Novak, and Brian Elza – to a moment of truth: all existing written and recorded music is now released.” Gore en Regalia is now available to purchase on Bandcamp; additionally, the original 1994 demo of Acumen Nation’s Transmission From Eville debut is now available on Bandcamp.