With the pandemic forcing the music industry to be the first to close and the last to be reopened, many venues around the world have been forced to shut down; as well, numerous tours, concerts, and festival events have been postponed or cancelled, but the continuation of ColdWaves through these livestream events is but one indication that the music scene will not go down without a fight. Since its inception, ColdWaves has provided a beacon of hope to guide people struggling through dark times, and although the cancellation of this year’s event was saddening, the organizers launched the “Lost Weekend” to keep the spirit alive by showcasing live videos of the first ColdWaves held in 2012, music videos, artist commentaries, and other features. Now, ColdWaves continues with “Season of the Glitch,” taking place on Friday, October 30; the free livestream will feature new performances and videos from a wide assortment of ColdWaves alumni acts, headlined by industrial legends Test Dept. Also on the bill are the brooding yet energetic post-punk of ACTORS, Twin Tribes, and Bootblacks to the searing and haunting sounds of Gost, Morgue VVitch, Haex, and Anatomy, the experimental soundscapes of Polyfuse, the pulse-pounding EBM of Klack, and the guttural industrial/metal of Acumen, and more to be announced, as well as DJ sets by Jeff Moyer, Baby Magick, and Bud Sweet. As with the “Lost Weekend,” this special ColdWaves “Season of the Glitch” (or alternate title of “Halloweenie Roast”) will be a free livestream event on Twitch, with further information to be announced soon. 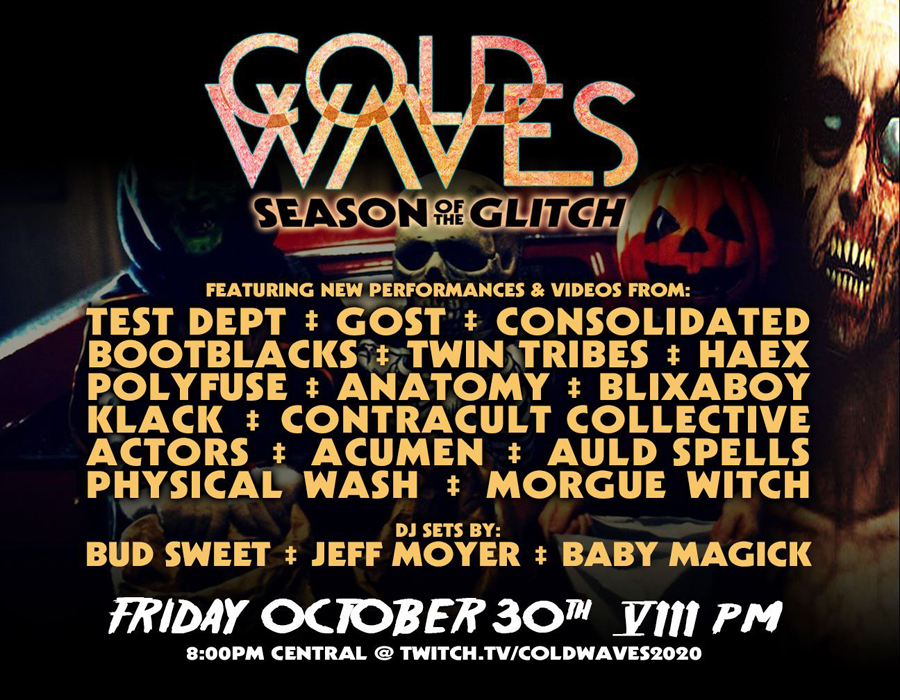 When the “Lost Weekend” event was announced, ColdWaves founder and organizer Jason Novak had stated, “Regardless of the current struggles our industry family and friends are enduring, we realize how much ColdWaves means to so many people every September, since Jamie Duffy’s passing in 2012 that inspired it all. We felt the need to do something, anything, to try and connect this passionate fan base…” That virtual event helped to funds for the Metro staff and the Darkest Before Dawn charity as proceeds from merch and auction sales and donations went to a GoFundMe campaign for the staff of Metro Chicago and the connected SmartBar and G-Man Tavern; as of now, that campaign is still open and has surpassed its original $75,000 goal. Regular sponsors and affiliates include Schecter Guitars, WaxTrax! Records, Electronic Saviors, Riveting Music, Superluminal Productions, and Half Acre Beer Company. ColdWaves IX has been rescheduled to occur on September 24-26, 2021, with the full band lineup for the in-person event yet to be finalized.