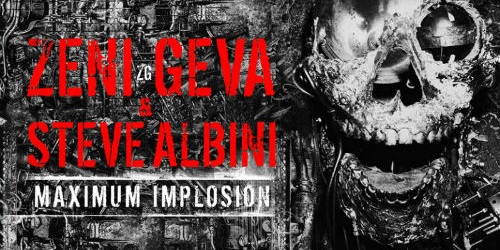 Maximum Implosion, a remastered collection of the collaborative work of KK Null’s Japanese noise.rock band Zeni Geva and prolific musician and producer Steve Albini (Big Black, Shellac), will be released on September 24 via the Cold Spring label. Albini began working with Zeni Geva as a producer on 1991’s Total Castration, continuing for several albums. The two-disc set consists of Zeni Geva material featuring Albini contributing guitar and vocals, including the Nai-Ha EP, All Right, You Little B*st*rds! 1992 live album, and bonus tracks from the Superunit 12-inch, with mastering by Denis Blackham and Attrition’s Martin Bowes, and mixing and production by Albini. The double digipak designed by Alonso Urbanos features artwork by Mitsushiro Hiruma. Maximum Implosion is available for pre-order through the Cold Spring website and Bandcamp.