Swedish darkwave and electro-pop act Priest has managed to maintain both a steady output and a dubious anonymity, the band members – vocalist Mercury and keyboardists Salt and Sulfur – hidden behind rubber gimp masks and leather jackets adorned in studs and spikes. Following up on 2020’s Cyberhead, the group has been steadily approaching the release of a third album, the first hints of which were delivered by way of the throb and thrust of such singles as “A Signal in the Noise” and “Techno Girl.” Now, Priest has finally announced the forthcoming Body Machine, due to arrive via Cleopatra Records on July 15 and available to pre-order now in digital, CD, and vinyl formats. “Body Machine is steeped in darkness,” the band explains, “but it also shows glimpses of hope through the black, hovering smog of polluted future cities,” with Priest going on to further state that it is the trio’s most diverse and heavily rhythmic record to date. Marking its third single and the final hint of what the album has in store is the “Blacklisted” single, available to stream via all major digital outlets. Body Machine can be pre-ordered via Bandcamp. Furthermore, Priest will be one of the support acts on The Machinists ReUnited European Tour, headlined by Front Line Assembly and Die Krupps; a full listing of dates and ticket links can be found on Die Krupps’ website, with Priest appearing from August 16-26. 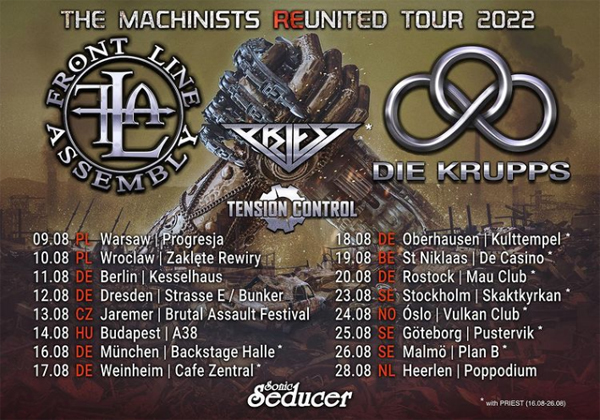