The Clay People set to return with a new album2 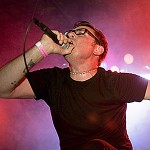 Coldwave/rock act The Clay People, after reuniting and performing at the 2012 and 2013 ColdWaves events in Chicago, is set to return with a new album. According to front man Daniel Neet, “This album picks up from the era of Stone-Ten Stitches, the self-titled, and the Headhunter Demos.” The band’s lineup includes guitarists Mike Guzzardi and Brian McGarvey, drummer Dan Dinsmore, and new addition Eliot L. Engelman, renowned for his work with fellow coldwave act Acumen Nation. While an album title has not yet been announced, the album will mark the first official release from The Clay People since 2007’s Waking the Dead.
A re-release of the band’s 1997 album Stone-Ten Stitches is also in the works, having been funded via Kickstarter and reporterdly featuring new remixes from Stiff Valentine, I:Scintilla, and more.