Claudio Simonetti’s work as a composer for horror films has endured for nearly five decades, with his score for Dario Argento’s 1977 supernatural thriller Suspiria standing as one of his most striking and influential works. Now, to celebrate the motion picture’s 45th anniversary, Simonetti will be taking his own iteration of progressive rock band Goblin on the road for an extensive tour of North America; spanning the last three months of the year, Simonetti and Goblin will be performing the full score of Suspiria set to a screening of the film, with the set to then shift after the intermission to encompass other Goblin material alongside clips of their corresponding films for a fully musical/cinematic experience. The tour will begin with a pair of Kansas City dates on October 25 and 26, and conclude with another pair of shows in Winnipeg, Manitoba on December 12 and 13, along with a single performance abroad in Tokyo, Japan on November 18; the tour will see Claudio Simonetti’s Goblin taking the stage in Chicago. Detroit, Philadelphia, Pittsburgh, Milwaukee, New Orleans, Los Angeles, San Francisco, Portland, Seattle, Montréal, and more, with two shows taking place on December 9 and 10 in Estes Park, CO at the Stanley Hotel, where Stanley Kubrick’s 1980 adaptation of Stephen King’s The Shining was filmed. A full listing of tour dates and ticket links can be found via Tone Deaf Touring. 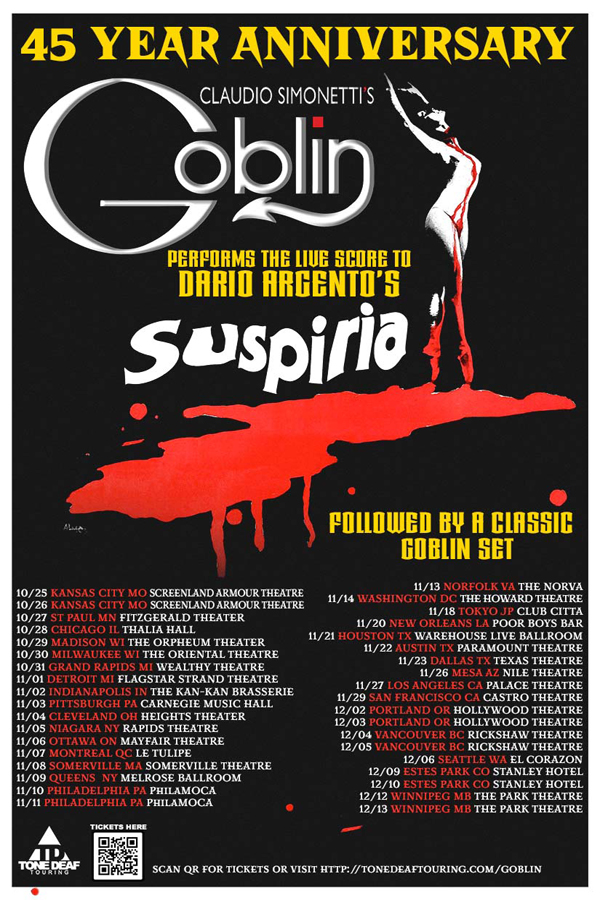