Friends and fellow musicians continue to rally for legendary bassist Charles Levi following his hospitalization in October of 2021 with the announcement of charity benefit in his honor. With proceeds to go toward Levi’s recovery and medical bills, the event will now be taking place on Friday, April 15 at The Metro, featuring a series of performances and DJ sets; headlining will be Stabbing Westward, along with Combichrist performing an “old-school electro set,” the duo of Chris Connelly and Martin Atkins, and an all-star band featuring Louis Svitek of Project .44 and Duane Buford. Additional sets will be given by BILE’s Krztoff, Chris Harris of Project .44, Final Cut’s Anthony Srock, and Bryan Black, with DJ Scary Lady Sarah spinning throughout the night. More info can be found on the Facebook event page, with ticket and VIP packages now available via eTix.com. 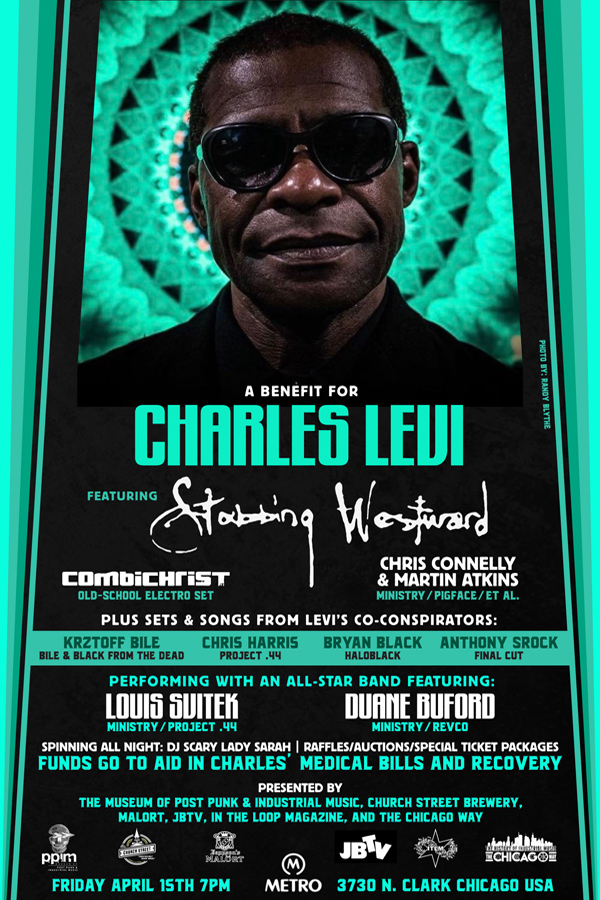 The Charles Levi benefit was originally scheduled for February 11 with Pigface to headline, but those plans were altered in the wake of restrictions with travel, work permits, and the rise in Covid infections. The event is presented by In the Loop Magazine, JBTV, Church Street Brewery, Jeppson’s Malört, The Chicago Way documentary, and The Museum of Post Punk & Industrial Music.
First coming to prominence as the bass player for My Life with the Thrill Kill Kult, Charles Levi has been a fixture of in the underground music scene since the late ’80s. He has been a member of and/or a contibutor to the likes of Pigface, Project .44, ConformCo, H3llb3nt, Haloblack, KMFDM, Black From the Dead, The Urban Soundtrack, and more.
A GoFundMe campaign was organized by Wolf Dodge to assist in covering Levi’s medical costs, with a project goal of $30,000, as well as to provide details of his treatment and recovery. The most recent update was posted on February 5, with Levi now recovering at the Northmoor Rehabilitation Center; he states, “I am looking forward to a full recovery, and back on stage, by this April! Thank you for your support, it is giving me strength. I love you all, and look forward to seeing you soon.”