Author & Punisher announced as support act for Tool in early 20200

With the experimental metal quartet currently in the midst of a tour to support the release of the band’s fifth album, Tool has announced the next leg of U.S. tour dates taking place within the first two months of 2020. Adding to the excitement is the confirmation that Author & Punisher has been selected to be the support act during these dates, which begin on January 10 in San Diego, CA and continue until February 1 in New Orleans, LA; a full listing of tour dates can be found via both bands’ websites and social media. This news is but the latest indication of the project’s rise through the ranks of modern music, crossing between the industrial and metal scenes with equal fervor and adulation; Author & Punisher’s Tristan Shone refers to the invitation as “a huge honor that I don’t take lightly,” as well as adding his apologies to fans for “future back pain and inevitable hearing loss,” as he will be performing with his full arsenal of self-created drone machines. 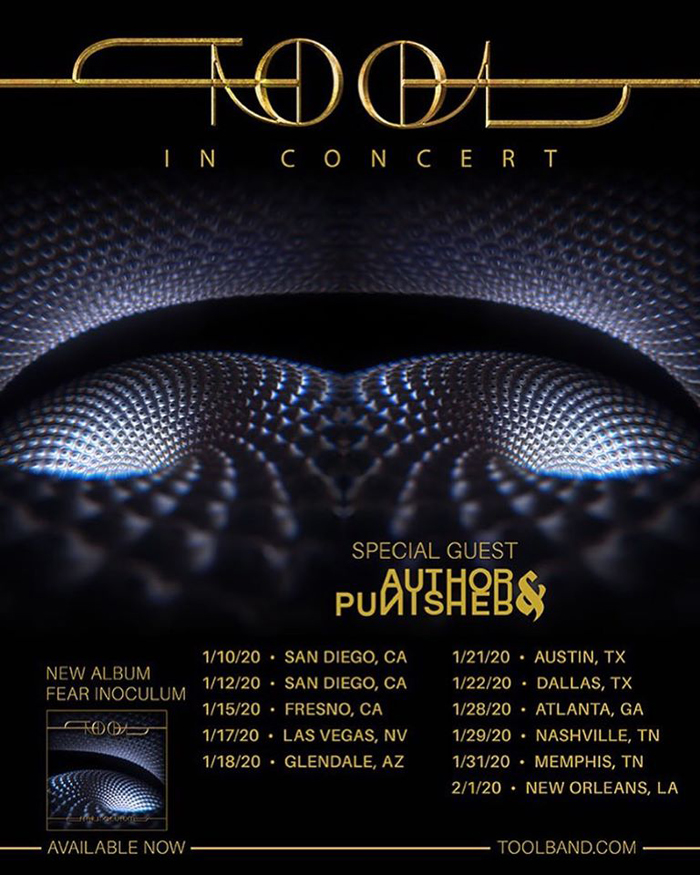 Most recently, Author & Punisher concluded a tour with fellow industrial/metal agitators GosT and 3TEETH in support of the latter’s METAWAR album; 3TEETH had previously been hand-selected by Tool to be the opening act on a North American tour in 2016. Tool’s current North American run with fellow experimental rock act Killing Joke will conclude on November 25 in Washington, DC. The band’s long-awaited fifth album Fear Inoculum was released on August 30, ending Tool’s silence of 13 years. Author & Punisher’s most recent album, Beastland was released on Relapse Records on October 5, 2018.