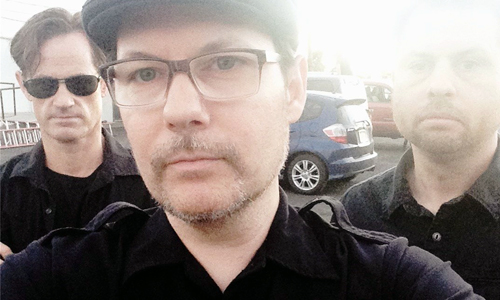 After a decade long absence, goth/rock band Audra has returned to launch an IndieGoGo campaign for its fourth album. With a planned release date of Spring 2019, this marks the group’s first album in 10 years, following 2009’s Everything Changes. Also slated to appear on the album is Mike VanPortfleet of fellow darkwave act Lycia, with the band once again comprised of brothers Bret and Bart Helm with drummer Jason DeWolfe; employing a D.I.Y. approach to production and distribution, Audra states, “This is a labor of love and often doesn’t yield any type of financial return. We create music because we love to – and as cliche as it may sound, we have to.” The as-yet-untitled album features nine tracks engineered by Joshua Rozenboom, and will mark Audra’s first release on vinyl, including an IndieGoGo exclusive limited to 50 copies. Vocalist Bret Helm states, “In the years where Audra may have seemed dormant, we have always been writing songs. Back in July 2018, we entered the studio with the intention of recording two songs, but after the first session with engineer Joshua Rozenboom we realized that we needed to go all-in and make an entire album.” Among the rewards offered in the campaign are handwritten lyrics, rare T-shirts, as well as pieces of gear that include the drum machine used on the first two Audra albums and the guitar amp used on 2002’s Going to the Theatre album.

Audra was formed in 1991 in Mesa, AZ, and has since released three albums, two of which were via Projekt Records; Bret Helm then joined Projekt flagship act Black Tape for a Blue Girl and was a prominent member on 2002’s The Scavenger Bride and 2004’s Halo Star. Audra has performed live alongside the likes of Peter Murphy, Concrete Blonde, Gene Loves Jezebel, The Mission, Nitzer Ebb, and more.