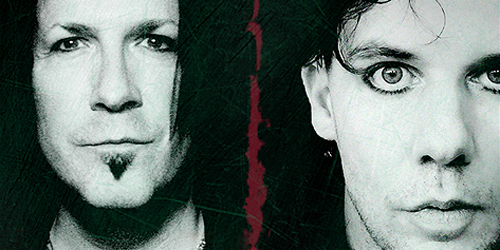 Ashton Nyte – vocalist for South African dark rock act The Awakening – has announced that he will be joining guitarist Mark Gemini Thwaite onstage for two European dates in June, including an appearance at this year’s Wave Gotik Treffen. The pair’s performances will not only include songs from the MGT Volumes debut, but also from the upcoming collaboration Gemini Nyte album, along with what Nyte calls “some treats from the past.” The performance at Wave Gotik Treffen will take place on June 3, with the second show at London’s Proud Camden on June 5. Tickets and additional info can be found via Ashton Nyte’s website.
Nyte contributed vocals to two tracks on Thwaite’s MGT solo debut, with a third song that sparked the duo’s continued cooperation; Thwaite had stated in a recent InterView with ReGen Magazine, “For any fans of ‘The Reaping’ and ‘Jesamine,’ I can confirm that the GN album is jam packed with material just as good as those songs.”