Ascension of the Watchers announces U.K. tour in February 20220

It has been a tumultuous past several years for atmosphereic and experimental post-rock act Ascension of the Watchers, but in spite of that, the band persists with the announcement of the Apocrypha Tour. With the core lineup now consisting of founding vocalist Burton C. Bell and producer/multi-instrumentalist Jayce Lewis, the tour will see the band performing throughout the U.K. in February of 2022, with stops including Huddersfield, Glasgow, Nottingham, Manchester, London, and more; a full listing of tour dates and ticket links can be found on the Ascension of the Watchers’ website. 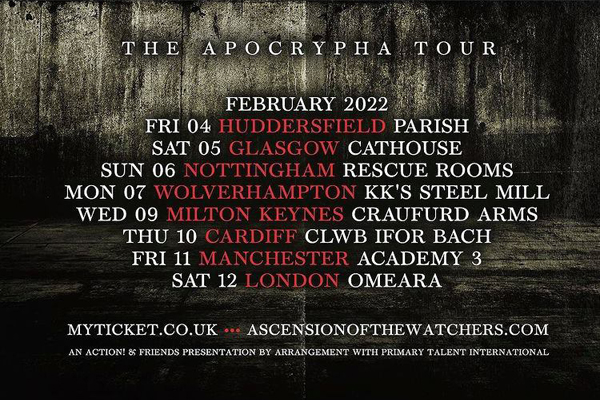 After the debacle of the PledgeMusic bankruptcy, 2020 saw the long-awaited release of the band’s Apocrypha on Dissonance Records, which arrived shortly after Bell’s highly publicized departure from Fear Factory. The album would later be released in an expanded edition featuring additional remixes, titled Apocrypha / Translations. Founding member John Bechdel announced his departure from the group on October 4 via social media, stating that he is concentrating his efforts on a new solo project and a new False Icons album; Bechdel commented that he is proud of his work with the Watchers and wishes the band well moving forward.