AL1CE announces second leg of As Above Tour, announces new single and video from upcoming So Below album0

Los Angeles electro/rock act AL1CE has announced dates for a Fall tour to continue celebrating the 2021 release of As Above. The second leg of the As Above Tour will be kicking off with a full acoustic performance to be livestreamed via the band’s Twitch channel, YouTube, and Facebook, with the tour to continue from then on until November 12; stops include El Paso, San Antonio, Houston, New Orleans, Tampa, Atlanta, Pittsburgh, Kansas City, Albuquerque, and Washington, DC, with a full listing of tour dates and ticket links available on the AL1CE website. As well, the tour will be preceded by performances at The Doll Hut in Anaheim, CA on September 23, and an appearance at the Mad Max-themed Wasteland Weekend on October 1. In addition, AL1CE will be releasing a new single, titled “Time,” along with a music video for the track created by director/photographer Tas Limur; the song is taken from the forthcoming companion album to As Above, So Below. As Above was released on October 22, 2021, and is currently available in digital and CD formats; the band’s cover of “Drown” had followed asa standalone single in March of this year as a tribute to Jonah Foree (Hardwire, Goth Brooks, Ikonoklast). 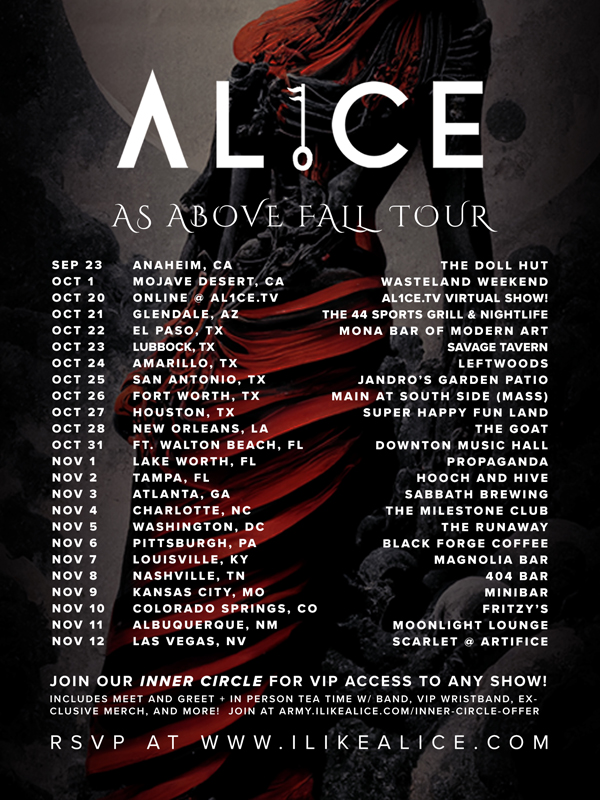