It’s difficult to believe that it’s been a full decade since ACTORS released its debut single, but the prominent Canadian post-punk band will be celebrating in style with the announcement of a new album. “We wanted to do something special with Artoffact Records,” keyboardist/vocalist Shannon Hemmett explains, with the band’s 2012 Post Traumatic Love/Nightlife single now packaged in a deluxe edition of the 2018 Reanimated EP, along with the “Post Traumatic Love” remixes; with the Humans remix acting as the first single, this deluxe version of Reanimated is due for release on August 19 via Artoffact Records, with pre-orders available on Bandcamp in digital, CD, and vinyl formats.

Adding to the band’s celebration of this momentous release will be a European tour this Fall, with the announcement coming hot on the heels of ACTORS most recent run of North America. With festival appearances planned for ColdWaves X, the Purple City Music Festival, and the Verboden Festival taking place in the interim, the European tour will proceed from October 19 to November 19 with stops including Glasgow, Manchester, London, Berlin, Prague, Barcelona, Paris, Madrid, Stockholm, Gdansk, Warsaw, and more; a full listing of tour dates and ticket links can be found on here. 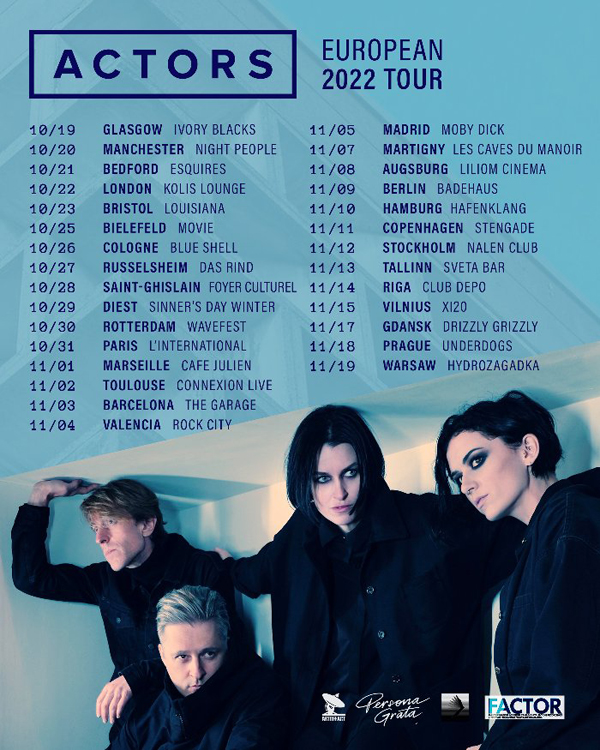 Additionally, Friday, May 6 saw the release of the “Runaway” single from Hemmett’s synthpop and darkwave project Leathers, which was followed by an accompanying music video one week later. Directed by regular ACTORS collaborator Wayne Moreheart, the video for “Runaway” presents a visual nod “to the golden era of ’80s pop,” with Hemmett joined by band mate Kendall Wooding on guitar in a saccharine yet playful blue and pink neon lit depiction of “breaking free and letting go” in the face of life’s routine mundanity. The “Runaway” single follows the June 2021 release of Leathers’ Reckless debut EP.

Meanwhile, ACTORS vocalist/guitarist Jason Corbett, having also established himself as an excellent producer, has once again collaborated with Irish shoegaze act Revolution Above Disorder on the soon-to-be-released “Annihilator” single. With drums also provided by ACTORS’ Adam Fink, the new single was written and performed by Revolution Above Disorder’s Stephen Nicholas White, with additional guitarist provided by Mat Durie; Corbett and Fink, as well as other members of ACTORS, have worked with White on past singles like “Scream Quietly” and “Illuminate.”

Of the song, White explains that it began life “in a treasure trove of demos back in 2020 as I was conceptualizing Revolution Above Disorder,” the song initially conceived to be an uptempo post-punk song when the Vancouver-based Dubliner was writing the second House of Dolls record. He goes on to credit Corbett’s production, as well as first wave trip-hop, ’90s big beat from the U.K., and krautrock as key influences in the song’s slower, more layered direction. The forthcoming Annihilator maxi-single, due for release on May 25, will also feature remixes of the track by London’s Jagz Kooner, and Berlin’s Noise Baby.