As numerous tours and festivals are regrouping in 2021 and beyond, so to is the Absolution Festival with the announcement of dates and performing acts for this year. Once again in association with Communion After Dark and Endoxa Booking, the event is scheduled to take place in Tampa (Ybor City), FL from Thursday, October 7 to Saturday, October 9, with dark synthpop artist Mr. Kitty, post-punk band ACTORS, and electro-po duo Korine appearing as the headlining acts; Mr. Kitty was also one of the original headliners for the 2020 event, with bands like Cold Medicine, The Bellwether Syndicate, Astari Nite, Gulf Blvd., and The Kentucjy Vampires also returning for the original lineup, as well as DJs Winters/Black. Added to this year’s event are industrial artists Curse Mackey, SINE, and KANGA, as well as darkwave act Death Loves Veronica, post-punk band Bootblacks, Hallows, Rosegarden Funeral Party, and Kiss of the Whip, along with DJ Sean Templar. The Thursday and Friday nights of Absolution Fest 2021 will be held at The Crowbar, with Saturday moving to The Orpheum; s full schedule of performing bands and tickets for the event are available via EventBrite. 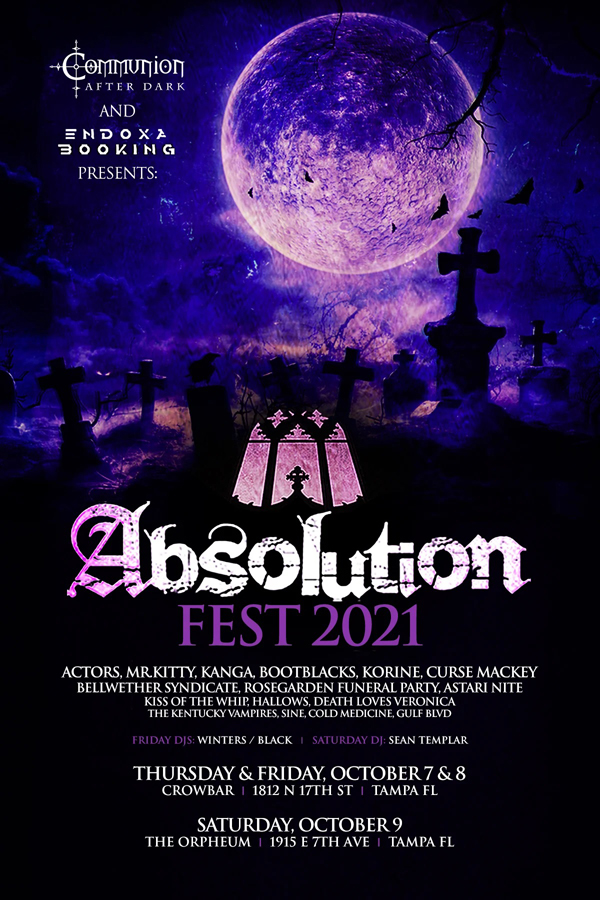